The following guest post was written by Michael Brodsky, of Airport2Park, and reflects the views and opinions of that organization, and not necessarily those of Los Angeles Walks.

Earlier this summer Airport2Park and Los Angeles Walks co-hosted a walk around the entire perimeter of the Santa Monica Airport. The walk examined the environmental impacts of the airport, looked at pedestrian infrastructure there, and explored the movement to replace the airport with a grand park. Soon after, on August 24, 2016, the Santa Monica City Council passed a unanimous resolution “to close Santa Monica Airport as soon as legally possible and begin planning for a park.”

Coincidence? We think not!

This is an historic announcement that sets Santa Monica on a clear path to eventually remove the barbed wire fences and de-pave the airport tarmac of the Santa Monica Airport, opening up 180 acres to walkers, joggers, bicyclists, and everyone in between. 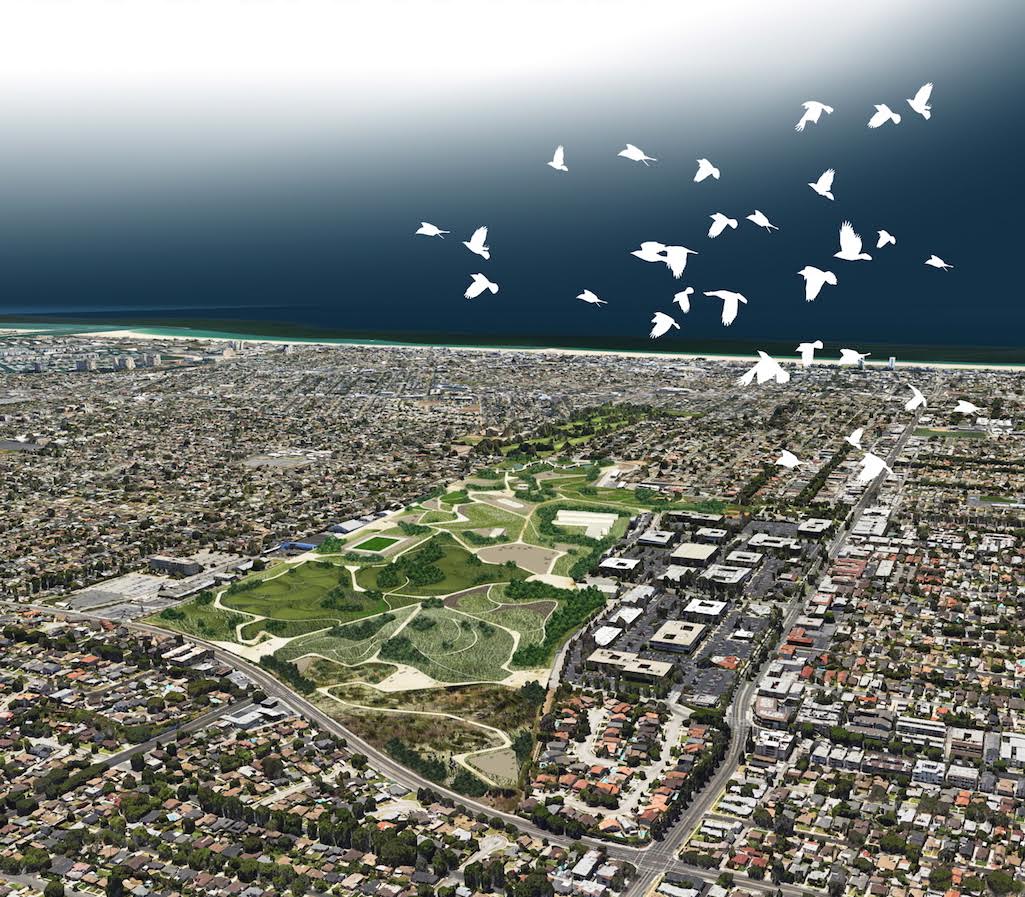 A rendering of the future former-Santa Monica Airport.

The momentum to turn Santa Monica Airport into a park is propelled by the need to address important quality of life and public access issues. For the neighborhoods of Sunset Park, Venice, Mar Vista, and Westdale, the need to reduce the harmful health impacts of noise, ultrafine particulate pollution, and toxic lead pollution caused by airport activity is immediate.

We also need to increase public access to parks and open space in Santa Monica. Surprisingly, the city currently has only 1.39 acres of parkland per 1000 residents. This is just half the average of L.A. County and a quarter of that of the City of Los Angeles. It is the absolute lowest per comparable cities in California. While only about 350 people actually fly out of the Santa Monica Airport every day, there are more than 2,000 daily visitors to the adjacent Clover Park, where we kicked off our walk in August. 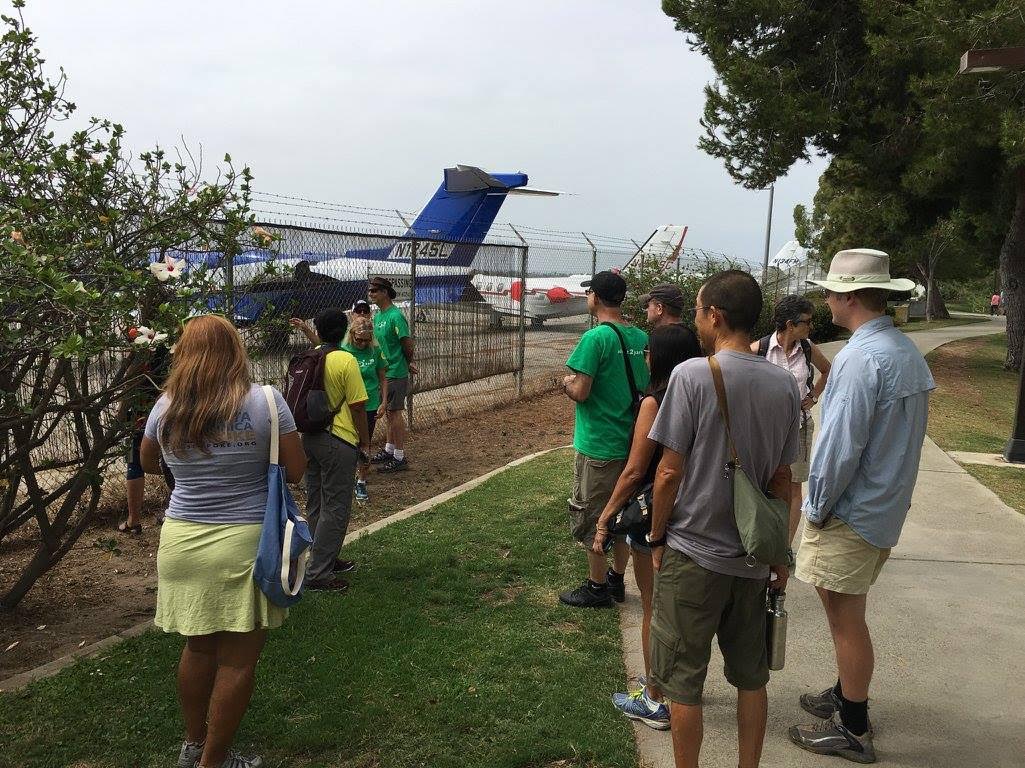 We met on a beautiful overcast morning in the southwest corner of Clover Park, where only a chain link fence separates the airport runway and the park. Our first stop was at the children’s playground that backs up to the fence. Only 25 feet away, the private planes at Santa Monica Airport fill up with toxic lead aviation fuel. About 50 yards away is an active jet runway and a holding area, where aircraft idle and spew jet fumes and ultrafine particulate matter into the air that people in the park and families in nearby homes breathe every day. Later we would see a pre-school located in a similarly precarious spot, and houses dangerously close to the end of the airport runway.

Thankfully, the August 24 City Council resolution addresses these conditions, directing the Santa Monica City Manager to immediately minimize the current harmful impacts of aviation use. The City would do this by taking over the “Fixed Base Services” and evict private Fixed Base Operator jet companies, removing the “Western Parcel” to shorten the runway to create a safety zone that would remove larger jets, and ending the sale of toxic lead fuel at the airport. City Council member Gleam Davis also gave direction to airport staff to start the Environmental Impact Report and National Environmental Policy Act planning as soon as possible, so when the airport is finally closed, the project to create a new park would be “shovel ready.” 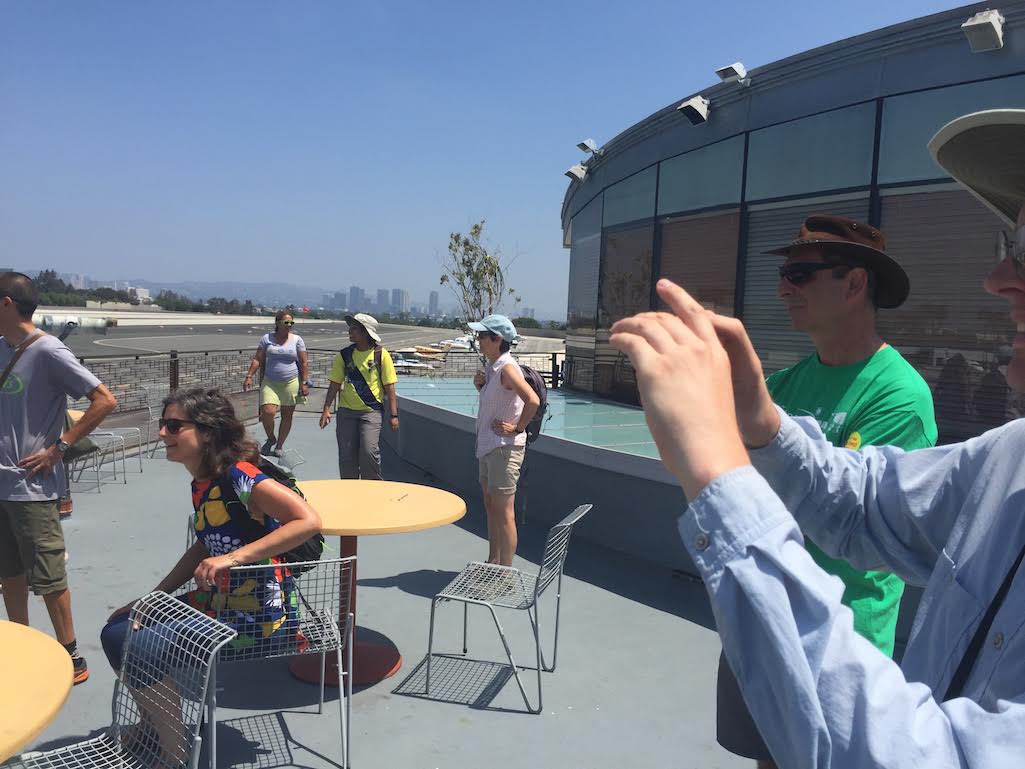 Given all of this great news, the process to close the airport and build a park 1/3 the size of New York City’s Central Park will not happen overnight. There are two important court cases that must be heard in Federal Court that will clarify the rights of the City regarding this land. But we now have a clear roadmap of civic steps that will eventually lead to a greener future for Santa Monica.