A Future of Walking on Age-Friendly Streets?

On May 18, Los Angeles Mayor Eric Garcetti unveiled the Age-Friendly City Initiative: Purposeful Aging LA, which is his 17th Executive Directive in the three years he has been mayor. With the Initiative, Los Angeles joins 90 other American cities and three others in California—San Francisco, Saratoga, and West Sacramento—in the AARP Network of Age-Friendly Communities.

The World Health Organization (WHO) birthed the Age-Friendly movement in 2006, and a year later, WHO suggested steps cities take to improve livability for older adults in its 2007 publication, Global Age-Friendly Cities: A Guide. While WHO invited Portland and New York to join the original Age-Friendly network, no other major American jurisdictions were selected. 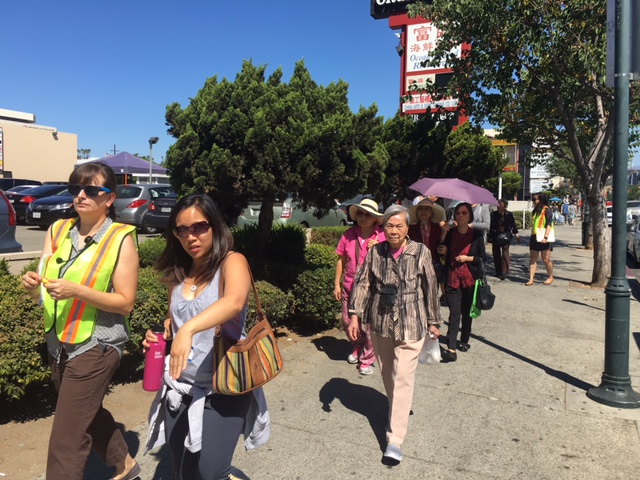 Stereotypes would suggest that Los Angeles could never be a part of such a network, because of our expansive geography, reputation for congested traffic, short history of rail transit, high cost of housing and health care, and assumed Hollywood obsession with youth. However, the half million 60+ adults living in the City are culturally, economically, and racially diverse. Local Baby Boomers are maturing from middle age workers and residents to vibrant older adults, and this large demographic group necessitates that Los Angeles thoughtfully respond.

LA City Department of Aging General Manager Laura Trejo will be responsible for implementing the Mayor’s Initiative in coming years. She has been working diligently with the LA County Community and Senior Services Director Cynthia Banks to develop the directive, along with four other partners: Paul Irving and the Milken Institute Center for the Future of Aging; the local AARP; the USC Leonard Davis School of Gerontology; and the UCLA Los Angeles Community Academic Partnership. Additionally, Purposeful Aging Los Angeles is a regional effort on the part of all the partners, engaging Southern Californians in envisioning a future that improves the lives of residents throughout their lifespans.

Mayor Garcetti’s effort to join the Age-Friendly movement is important, not because it claims that we are already hospitable to our diverse residents’ aging, but because it signifies his administration’s commitment to examining and enhancing the daily experiences of our city’s older adults and to making Los Angeles a safer, healthier, and more engaged place for people to age. The Mayor has ordered his City Departments to convene a Purposeful Aging Task Force which will conduct a needs assessment, create a strategic plan in compliance with AARP and WHOs Age-Friendly guidelines, and hold city agencies accountable for ensuring a safer, more prosperous, and well run city which ultimately provides a more livable community--to benefit older Los Angelenos and all of us.

This new directive allows our aging residents to maximize the potential that a world-class city such as Los Angeles offers. The balmy weather, combined with fantastic cultural, economic, social, health, and intellectual opportunities, provide a climate in which we all want to age in our own communities. If we can maintain access to quality housing, transportation, and neighborhood resources, providing safe sidewalks, vibrant social connections, and grounded civic programs, we can pursue an older age in which we thrive. For Los Angeles to give an honest recognition and validation to the process of aging is an important step in combatting ageism in our industries, in our families, and in our public places. We are all aging, and our Mayor’s directive now recognizes and affirms that truth.

The work of Los Angeles Walks is important to this affirmation process, as it encourages residents of all ages to get out of their homes and onto streets and sidewalks in the community. Older adult pedestrian safety is a main point of the Age-Friendly City Initiative, in connection with the Mayor’s Executive Directive 10, the Vision Zero safe streets initiative of 2015. By January, 2017, the Department of Transportation must report to the Mayor on those intersections that present highest risk for older pedestrians and how the Department will respond. With its Safe Routes for Seniors programming and its work coordinating the Vision Zero Alliance, Los Angeles Walks is already bridging the two initiatives.

For more information on the Mayor’s Directive, check out lamayor.org/mayor_garcetti_s_executive_directives and to consider how you or your organization can be involved in the regional partnership, check out www.purposefulagingla.com.

Caroline Cicero, PhD, MSW, MPL is a gerontologist and teaches at USC Davis School of Gerontology. This article originally appeared in the 2016 Edition of Footnotes our yearly report on the state of walking in LA. This year's theme was "Walks for All Ages."