However, one evening in November 2017, while my then 9-year-old brother and I were walking home from the store, a distracted driver made a left turn on a residential intersection in unincorporated Florence-Firestone and hit us. I remember moments prior as we reached the end of the curb seeing the car -- a black pick-up truck -- signaling that it would turn left. We waited for approximately five seconds, saw it wasn't turning, and began to cross in the unmarked crosswalk area. We barely made it a couple of steps before I saw the truck starting to turn towards me, the headlights becoming brighter and brighter.

The right thing to do was to go to the hospital to have our injuries properly assessed but I worried about an unexpected high cost and unnecessary ambulance and medical bill, despite the fact that I had health insurance coverage.

My mind flooded with thoughts in those few seconds: “Oh the car is turning, they should see us now....do they see us now?... Are they going to stop? Is this car really about to hit us right now?” And then bam! I felt the impact on my left shoulder drop my brother and I to the ground. Thankfully, the car stopped right after impact. I immediately looked to my brother asking “Are you okay?” and he stood up and began to cry. I was worried that he had been seriously hurt. Then, the distressed driver came out and helped pull us to the side of the curb.

Slowly, the intersection began to fill with people. Neighbors nearby witnessed the collision and called 911. One neighbor gave my younger brother and I bottled water and another neighbor gathered our belongings that had been scattered on the road and returned them to us. I kept asking my brother if he was okay and though he was crying, he assured me he was fine and then worriedly asked me “what about you?” and pointed at my legs. At that point, I noticed the scrapes on my knees and feet (I had been wearing shorts and sandals, big mistake) which then started to sting. I also immediately called my other brother to come find us. 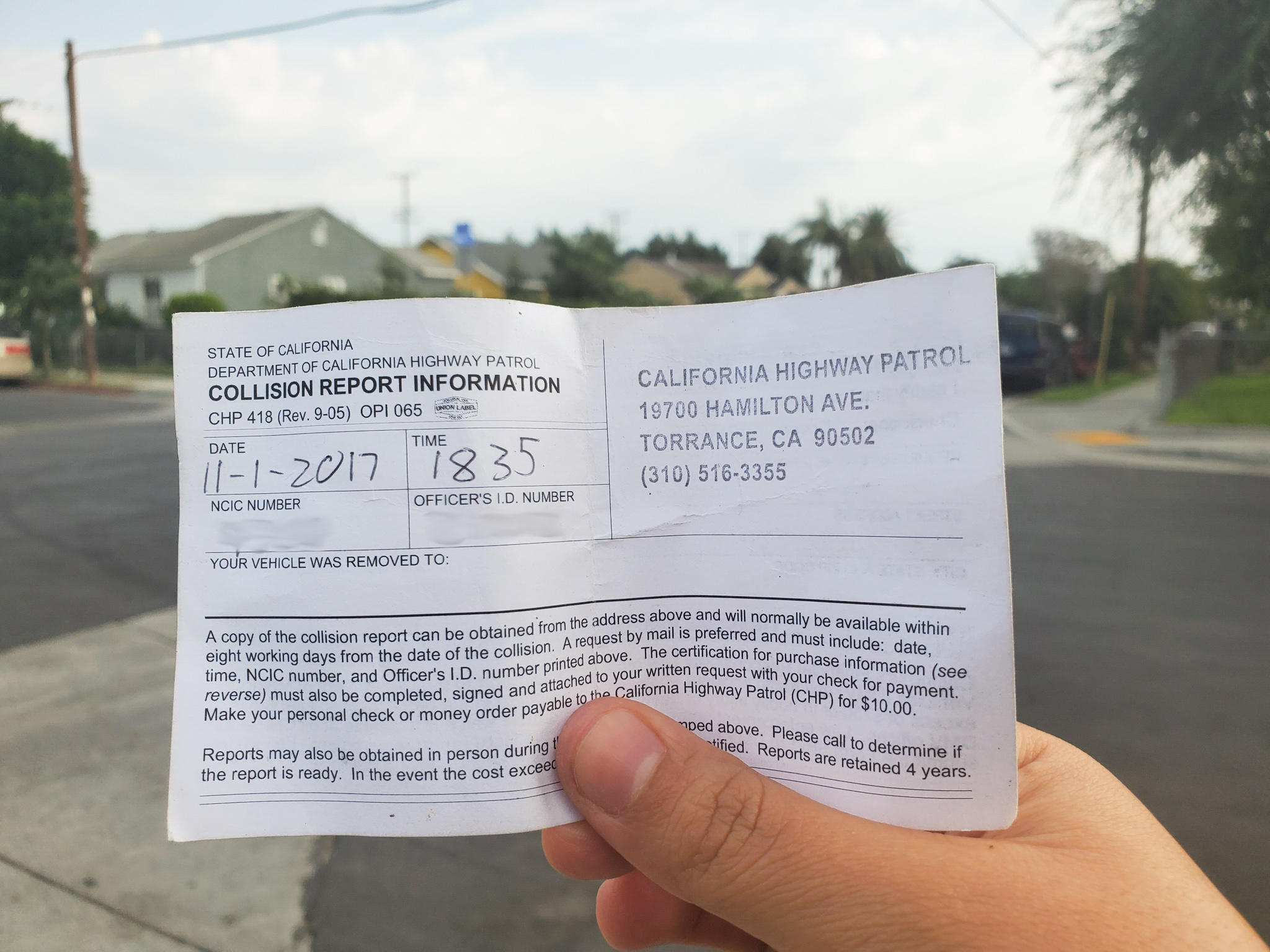 The image of the pick-up truck’s bright headlights coming closer and closer kept replaying in my mind. I couldn’t bring myself to wear the clothes I wore that day again and eventually discarded them.

After that, an overwhelming blur of things were happening all around us. The fire department and ambulance came nearly at once. A paramedic cleaned the scrapes and placed bandaids on my knees and assessed my brother. A California Highway Patrol officer came and pulled me aside to ask me questions about who was involved, my name and information, and the location of where I was hit. I was overwhelmed having to answer all of these questions, still shaking and in shock from what had just happened. Once the officer was done, he handed me a card with the date, time, officer ID number, and an address in Torrance where I could request the report; I was confused and asked “that’s it? You don’t do anything else?” I was clueless about the process and didn't realize they were only there to document the collision for the report, which could then be used for an insurance claim. Afterwards, the paramedics asked if we wanted to be transported to the hospital. Aside from the stinging on my legs, I felt fine and I was able to walk. My brother only had a scrape on his elbow.

So I signed paperwork documenting my declination of services. The right thing to do was to go to the hospital to have our injuries properly assessed but I worried about an unexpected high cost and unnecessary ambulance and medical bill, despite the fact that I had health insurance coverage. As the activity at the intersection died down and we were leaving with my dad to his car, a man approached us and gave us a business card for legal services for car collisions, which we ultimately decided to pursue. As I’ve since learned from reading the Southern California Families for Safe Streets Resource Guide, this was probably not a good idea, as they may have not had our best interests in mind.

My experience is not unique as pedestrian injuries and fatalities from traffic collisions are high in communities like mine and represent a symptom of something much bigger.

In the days and weeks afterwards, I just felt pretty defeated. My dad was angry at us for walking and scolded us  - “why were you walking when you have a car?” The image of the pick-up truck’s bright headlights coming closer and closer kept replaying in my mind. I couldn’t bring myself to wear the clothes I wore that day again and eventually discarded them. I also felt at fault for many things: for not waiting longer on the curb for the truck to turn left first, for going to the store for an unnecessary errand, for not having done the errand earlier in the day, for choosing to walk, and for being the one responsible for leading my brother into danger. It felt so unfortunate and ironic that choosing to walk more actually increased our risk of (fatally) being hit by a car and outweighing any health benefit we would have otherwise had.

Although we were not seriously hurt, the experience really shook us and we didn’t want to walk anymore after and returned to the car as our primary mode of transportation.  It took some time before we were comfortable with walking again but eventually we were able to after a couple of months. Looking back, I wish that I would have sought out therapy services at the time; it would have really helped me process that traumatic event. I definitely suggested it to my mom specifically for my brother, since he was so young and I was worried about how unprocessed trauma like this could affect him, but it was not a suggestion that was enthusiastically considered, as seeking therapy is highly stigmatized. Nevertheless, my family supported us during recovery by bringing or making us food, helping us with anything we needed, and allowing us time and space. Ultimately, time was our best source of healing, and I do not blame myself anymore for the collision. My experience is not unique as pedestrian injuries and fatalities from traffic collisions are high in communities like mine and represent a symptom of something much bigger.

That's why projects like the Los Angeles County Department of Public Health Pedestrian Plan for unincorporated Willowbrook and West Rancho Dominguez I am supporting with this summer are important - pedestrian injuries and fatalities from traffic collisions are so common and continue to happen in disinvested communities in unincorporated Los Angeles County and the city of Los Angeles. The most basic safe street infrastructure such as traffic signals, speed humps, crosswalks, and lighting are still missing and not being implemented where they are needed. Helping increase the voices of community members in this planning process is vital to securing the safe street infrastructure that is needed and ultimately preventing injuries and deaths throughout Los Angeles County.

Yanel is a graduate student pursuing her Public Health Masters at the University of California, Los Angeles. She served as an intern with Los Angeles Walks during the Summer of 2021. 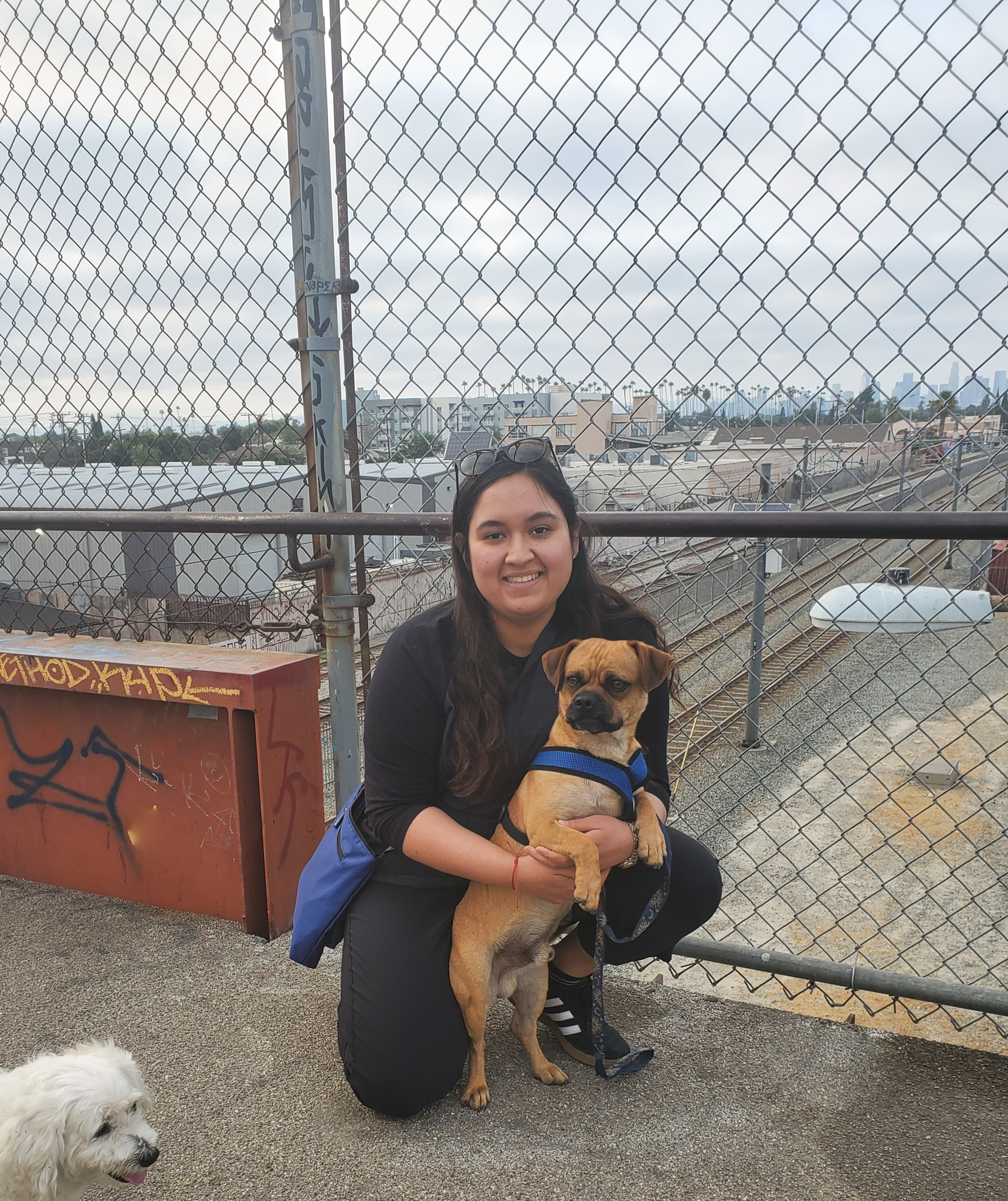 Yanel posing on the pedestrian bridge by Roosevelt Park with Jerry (right) and Junior (left).