It's Time to Clarify the Crosswalk Law 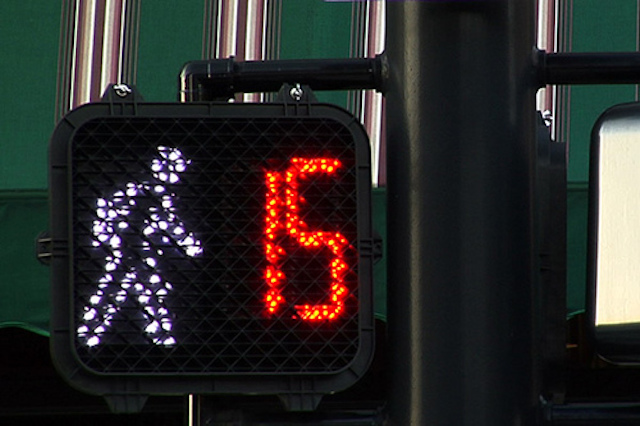 Across California, it's currently illegal to step off the curb and cross the street once a pedestrian countdown signal has begun, even if the person walking knows they have enough time to cross.

Yep, the California Vehicle Code states that it is unlawful for a person to enter a crosswalk at any time other than when the signal says “Walk," including during a countdown. Why? Because the law was written before pedestrian countdown clocks even existed!

It's time our state legislators update this law, not only to bring it in line with the times and avoid confusion, but to bring an end to counterproductive LAPD pedestrian "jaywalking" sting operations, widely covered in spring 2015 by the LA Times and Streetsblog LA.

Assembly Bill 390, recently introduced by Assemblymembers Santiago and Ting, will change the law to make it legal for people walking to enter the crosswalk during a countdown signal if there is enough time to reasonably complete the crossing safely. This will bring the law in line with how pedestrians are actually behaving - so we can all stop breaking the law unintentionally.

One more benefit of the clarified law is that pedestrians who enter the crosswalk during the countdown phase will more clearly have the right of way. Should a person walking be involved in a collision, the updated law may make it easier to argue that the pedestrian was acting lawfully. (Reminder that drivers should ALWAYS yield to pedestrians.)