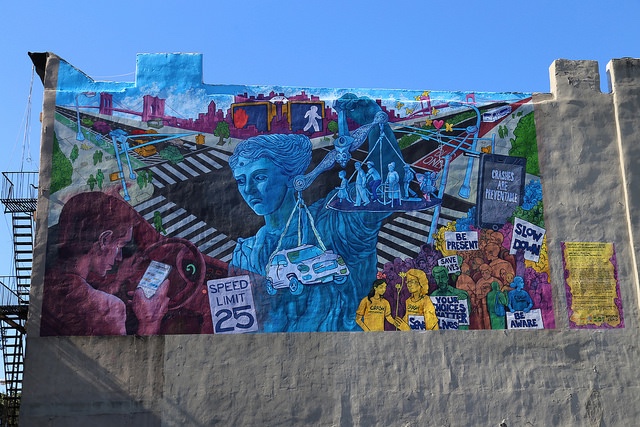 The focus of the residency will be to identify creative interventions in alignment with Vision Zero, the city-wide goal to reduce traffic fatalities to zero within ten years.

City agencies have incorporated art into safe street initiatives before, including "Justice at the Crossroads," the mural (above) created in partnership with NYCDOT by Groundswell youth advocates, and "Curbside Haikus," also in New York City. But LA's Creative Catalyst Artist residency is the first known program to take a creative approach to the work of an entire city agency - one typically focused on service delivery.

Recognizing that the success of Vision Zero depends on the city's ability to shift public perceptions, attitudes, and behaviors around traffic deaths - a true culture change, as Danielle Brazell, Dept. of Cultural Affairs general manager described it to the LA Times - the program intends to reflect the numerous ways designers, performers, curators, and other creatives can help.

Applications are due by 5pm on Friday, November 6. Apply online here.