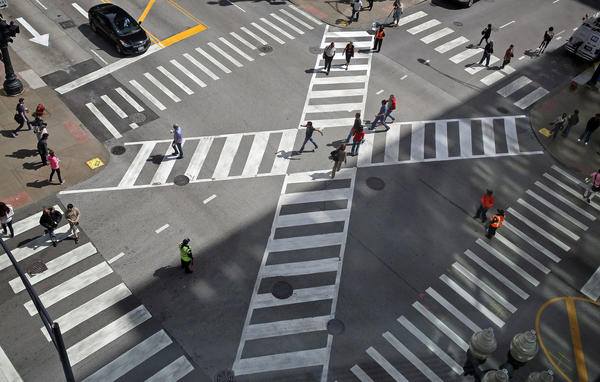 Hollywood and Highland is one of the busiest intersections in the city for walkers, but it’s also one of the most dangerous. Both Los Angeles Walks and a recent report by the Los Angeles Times have highlighted the high number of pedestrian collisions here. But what’s interesting to note is that this intersection is already pedestrian-only some of the time—it’s often closed to cars to accommodate premieres at one of the many theaters on this block. Hollywood needs to go ahead and close this intersection to cars permanently—close it all the way to La Brea. Before it’s too late.

There’s no better place to do it. Hollywood is home to one of LA’s most notable landmarks which just happens to be all about walking. The terrazzo stars draw millions of pedestrians to Hollywood every year to examine these blocks on foot; you can’t see the sidewalks from a car or a tour bus. Imagine if the Walk of Fame not only celebrated famous Angelenos but also honored LA’s pedestrians, too.

Hollywood Blvd. and Highland Ave. as of November 15, 2015, after installation of new pedestrian scramble crosswalk.
crosswalks Hollywood Pedestrian Safety walkability news footnotes
Do you like this post?
Tweet