If you walk in Los Angeles, support legal sidewalk vending 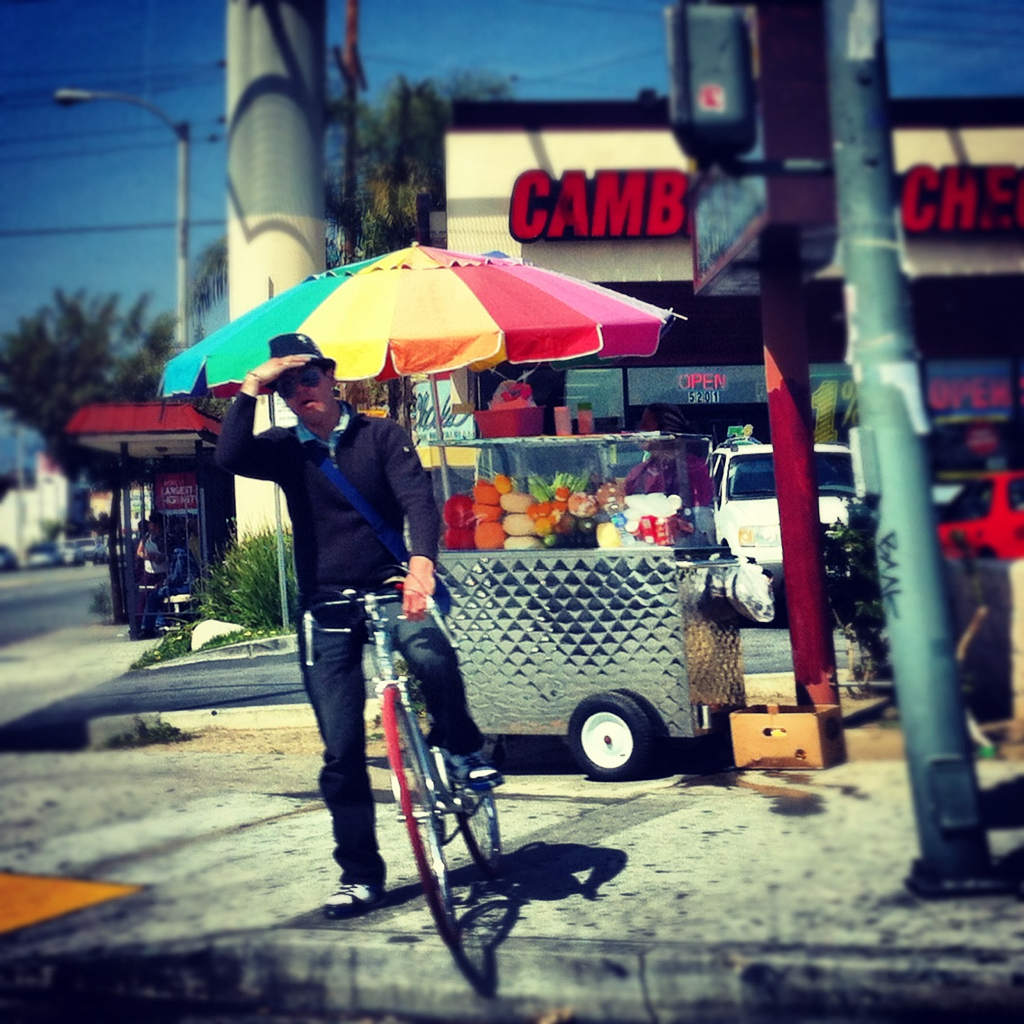 The Los Angeles City Council is considering whether and how to legalize sidewalk vending. Public hearings are being held to get residents’ viewpoints before a vending ordinance is drafted. LA Walks supports the legalization of sidewalk vending. We encourage everyone who cares about walking in LA to attend one of the two remaining vending hearings:

Here are some reasons why people who like to walk in LA should support a permit system for legal sidewalk vending:

1. Sidewalk vending makes LA more walkable. Walkable cities have a mix of uses and destinations, people out on the sidewalks at all hours, sights and smells and interactions to keep streets lively. Sidewalk vendors are destinations, gathering places, eyes on the street, colors and flavors all in one.

2. Legalizing vending helps ensure that everyone has a right to use our streets. Rebecca Solnit, in her book Wanderlust: a history of walking, reminds us that walking has long been a political act. Women, minorities and gays and lesbians have all had to struggle to gain the social right to walk out in public. Environmentalists. pedestrian groups and disability rights advocates had to campaign to gain ordinary people open space and infrastructure on which to walk/roll. Unions helped win time for people to stroll and recreate. Legalizing sidewalk vending is part of this legacy of expanding access to the city.

3. Vendors and pedestrians can share space on our sidewalks. LA Walks worked with The Los Angeles Street Vendor Campaign to recommend that vendors be required to locate so as to leave at least 5 feet for pedestrians to pass by. This exceeds federal ADA requirements.

4. The war on vending has long been linked to car dominance. LA banned sidewalk vending in major business districts starting in the 1930s and citywide in 1980. Vending on sidewalks was restricted partly to make space for pedestrians - after the city defined people as jaywalkers and kicked them out of roads. Banning vending drained life from city streets. The irony of eliminating sidewalk vending to make space for pedestrians, pointed out by Anastasia Loukaitou-Sideris and Renia Ehrenfeucht in their book Sidewalks: Conflict and negotiation over public space, is that removing vendors as ‘obstructions’ also removed one of the main reasons why people liked going outside and walking.

5. Immigrant vendors helped bring pedestrians back to Los Angeles streets. Sidewalk vending is the original tactical urbanism. When immigrants from Latin America started coming to Los Angeles in large numbers in the 1970s and 1980s, they brought with them life experience in cities where people used public space. By returning commerce to (and placing culture on) the sidewalks, vendors have brought people back to streets as or more effectively than most intentional street-changing designs, programs and policies. As the City moves to make walking safer and more convenient, it would be wrong to exclude these pioneers of a more walkable Los Angeles.

6. Legal vending can help make LA a just and diverse place worth walking in. Walking is the most democratic form of transportation. People can walk (or roll in a wheelchair) even if they lack funds to own a vehicle or if they are too young to have a drivers license. Walking also exposes residents to each other. It fulfills one of the basic purposes of a city- which is bring people in contact with those different than themselves. As Los Angeles becomes an increasing costly place to live, legalizing vending can help ensure that low income residents can start a business and have a future in LA.

7. Vending is Los Angeles. What Roy Choi said when he introduced his Koji truck in 2008 applies to vending in general: it takes “everything about LA and put it into one bite.” I think we all know in our hearts that we can’t have ‘great streets’ in the City of Los Angeles without sidewalk vendors.

For more information on sidewalk vending in LA, visit http://streetvendorcampaign.blogspot.com/ or look for these book chapters by LA Walks’ Mark Vallianatos: