Like no other time in my life, we are all under pressure to fight for what matters to us, whether that’s rights and respect for indigenous people and immigrants, the dismantling of racism and dominant white culture, or equal pay for people with disabilities and for all women. Maybe it’s the environment, education, restorative justice, and simply the right to be who we are and love who we love. These are by no means new fights, but today there is an elevated sense of urgency, and there is so much to fight for. At Los Angeles Walks, we remain dedicated to the fight for safe and equitable walking, which we see as intimately linked to so many social justice concerns and basic rights, like the right to health and safe movement, access to opportunities, affordable housing, harassment-free public space, and basic dignity for all.

Where we have come from

Since starting Los Angeles Walks, my personal and professional fight has been for a safer, more accessible, more pleasant city that supports walking - the most fundamental form of mobility. In 1998, I was dodging drivers who wanted to run me over on Pico Boulevard in West Los Angeles on my way to the Commuter Express Bus to work in Downtown LA. Nearly 20 years ago, I knew that all of us walking deserved better, and I decided to take my fight to city hall. I gathered up a bunch of committed makers and doers, urban designers and planners, architects, elected officials, advocates, transportation geeks, and transit nerds. We were fed up with disrespectful drivers, bad street design, and unsafe and unattractive walking conditions. Together we started the first pedestrian advocacy organization in Los Angeles. 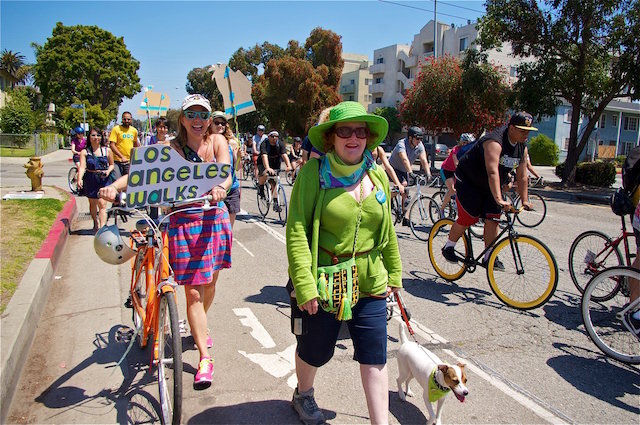 At the time, people thought of us as a curious special interest group with a narrow focus and little relevance to the majority of people in car-centric Los Angeles. City officials (who once literally pat me on the head and said, “we love pedestrians too”) widened roadways, narrowed sidewalks, eliminated crosswalks, removed street trees, lit up streets but not sidewalks, removed bus stops, increased speed limits, and ticketed pedestrians for crossing the street too slowly. What little walking infrastructure that did exist, the City destroyed in order to make room for more and more vehicles, at the expense of people and neighborhoods across LA.

We have come a long way since those days. Largely thanks to the actions and advocacy of Los Angeles Walks’ founding board members, the City of Los Angeles hired its first Pedestrian Coordinator in 2011. Soon after, the City launched the People Street program and Great Streets Initiative, adopted Mobility Plan 2035, and passed a Vision Zero policy. Los Angeles hired a bold, bright new General Manager, Seleta Reynolds, to head up the Department of Transportation. In March 2017, more than 70% of Los Angeles County voters supported Measure M, the sales tax increase that will fund a massive transit expansion.

We must continue the fight

Despite, or maybe because of, this progress, this is a challenging time for walking advocacy in Los Angeles. Within the past few years, City leaders have committed to improve mobility options and transportation safety; to support disadvantaged communities, aging in place, healthy communities, and environmental justice; and to increase funding for active transportation, open streets events, and transit. With this support, though, comes a stronger backlash than I have ever seen, and stronger reinforcement of the status quo.

Walkable communities and pedestrian safety, including Vision Zero, are now discussed in mainstream media, not just among us walking advocates and within professional publications. We have more data than ever to document where people are walking, where they are being hit and injured or killed, where people want to walk, and what kinds of techniques and treatments will make walking safer. But we also have more people expressing skepticism about that data and even questioning the prioritization of safe streets over smooth traffic flow. Drivers in some communities claim that there is a “war on cars” and that making space for people to walk and bike more safely goes against Los Angeles’s car culture and auto dependency.

Like so many moments before it, this is a time of transition in LA. For too long, people and neighborhoods have paid the price for bad, out of balance design. We have made too much progress in recent years to turn back now. As an organization, Los Angeles Walks needs to be up to the current challenge, fully committed to not only fight the status quo, but build up new support for a shared vision of healthier, safer communities that support human life.

Where we are going

We are proud to announce that we are appointing our current Policy and Program Manager Emilia Crotty as full-time Executive Director, and will soon hire a new Advocacy and Engagement Manager. This new staff person will assume leadership of the LA Vision Zero Alliance, a citywide coalition convened by Los Angeles Walks. As founder, I will take on the role of Chief Strategist for the organization. 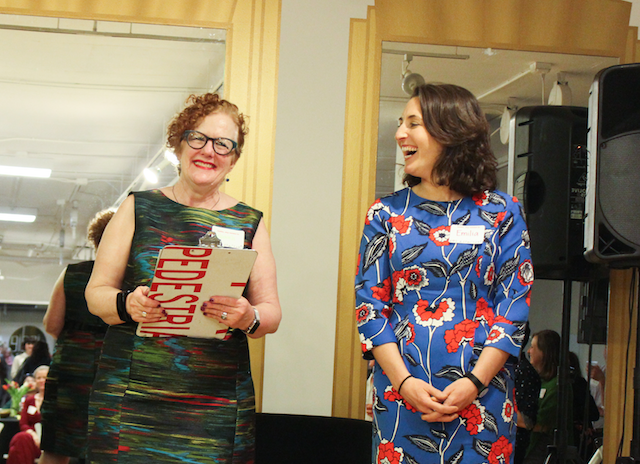 Emilia has been a relentless champion for Vision Zero in Los Angeles, establishing and sustaining the LA Vision Zero Alliance for the past two years. Since joining Los Angeles Walks, Emilia has taken on a wide range of additional projects and priorities, which she will continue to champion as ED. These include:

Please join me in congratulating Emilia on her promotion from Policy and Program Manager to Executive Director of Los Angeles Walks.

Please also join Los Angeles Walks in our work to create safe streets for all by providing a recurring donation or a one-time donation. It will take more effort than ever before to address the public health crisis on our city streets, where there has been a 36% increase in pedestrian deaths and serious injuries since Vision Zero launched in Los Angeles. As of early August 2017, 77 pedestrians have been killed on LA streets this year. Through your support, you will help to:

Or, consider joining our team! Applications for the Advocacy and Engagement Manager position are due Friday, September 15th.

Thank you for reading and for your continued support.

We are all pedestrians,