This is a follow-up to an earlier post regarding the Los Angeles Neighborhood Council Coalition's consideration of a dangerous, misguided motion intended to halt the installation of traffic calming measures across Los Angeles.

On December 1, 2018, the LA Neighborhood Council Coalition (LANCC) tabled the motion to its January 5, 2019 meeting. By January 5, LANCC had removed the anti-traffic calming motion from its agenda and replaced it with a new motion that attempted to take a more neutral stance on "road diets" (roadway reconfigurations). Still, the motion included loaded language that was not necessarily based in fact.

LA Walks and the LA County Bicycle Coalition (LACBC) mobilized safe streets activists to turn out in support of evidence-based engineering that saves lives -- projects that Los Angeles needs to embrace, not shun -- at the January 5 meeting. 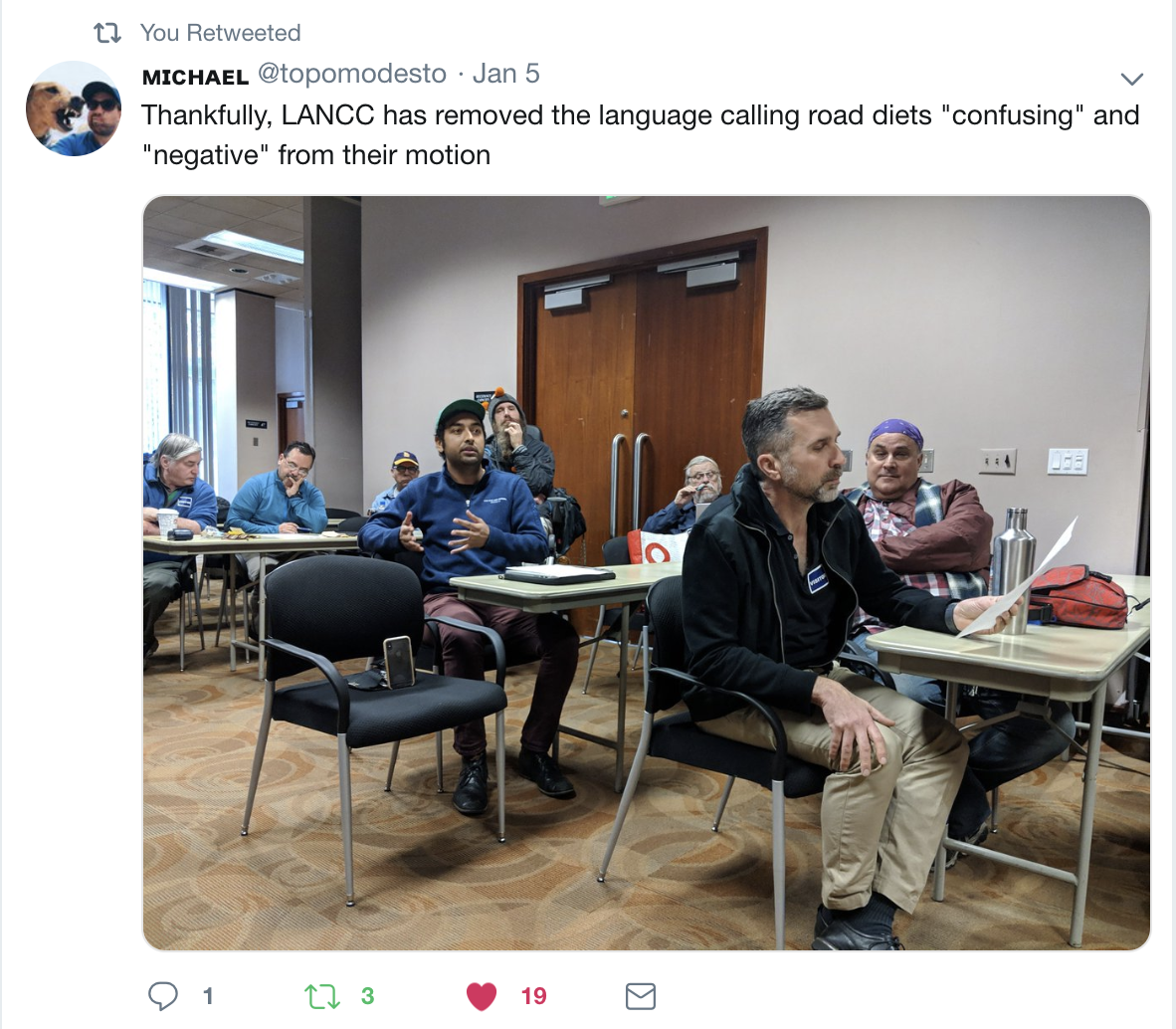 Our friend and colleague Jesi Harris, Director of Organizing at LACBC, provided the following recap of the meeting:

"Vocal members of our community fought hard and spoke inspiringly for an amendment that struck negative, unfounded statements from the legislative history that would be preserved in this document (through the motion). The clause 'some (road diets) are beneficial and some are not. The Los Angeles Neighborhood Council Coalition (LANCC) (XXXXXX Neighborhood Council) recognizes the beneficial effects of a road diet along certain corridors, but road diets create confusing, negative effects along other corridors' didn’t make the final cut.

That was a win I wasn’t even expecting but am proud to have witnessed.

The meting discussion included a host of amendments to the motion that changed the final language to read:

“The Los Angeles Neighborhood Council Coalition (LANCC) (XXXXXX Neighborhood Council) takes the position that there shall be no blanket prohibition of road diets or other road calming measures. Communities that will be impacted with a potential road diet or other road calming measure, including neighborhood councils, shall be consulted extensively about public safety and other important issues both before the road diet is proposed and after it is implemented.”

We also saw the results of a woefully under-engaged group of Neighborhood Councils - people struggling to define the term “road diet,” conflating traffic calming with traffic-causing, and disconnected from the personal narratives and motivations that drive the kind of powerful advocacy we displayed. Terrence Gomes, President of the LANCC was right when he pointed out a lack of engagement and eduction about road safety techniques.

I want to thank everyone who came and to those who spoke. Your words were brave and important. As we move into 2019, this type of unity and action will help us to engage and educate our Neighborhood Council representatives to make decisions for the best of our livable communities."

Thank you to Jesi for this write-up!

Streetsblog LA also covered the January 5, 2019 meeting, which you can find here.