Vista del Mar is a Sad, but Instructive Lesson for Los Angeles 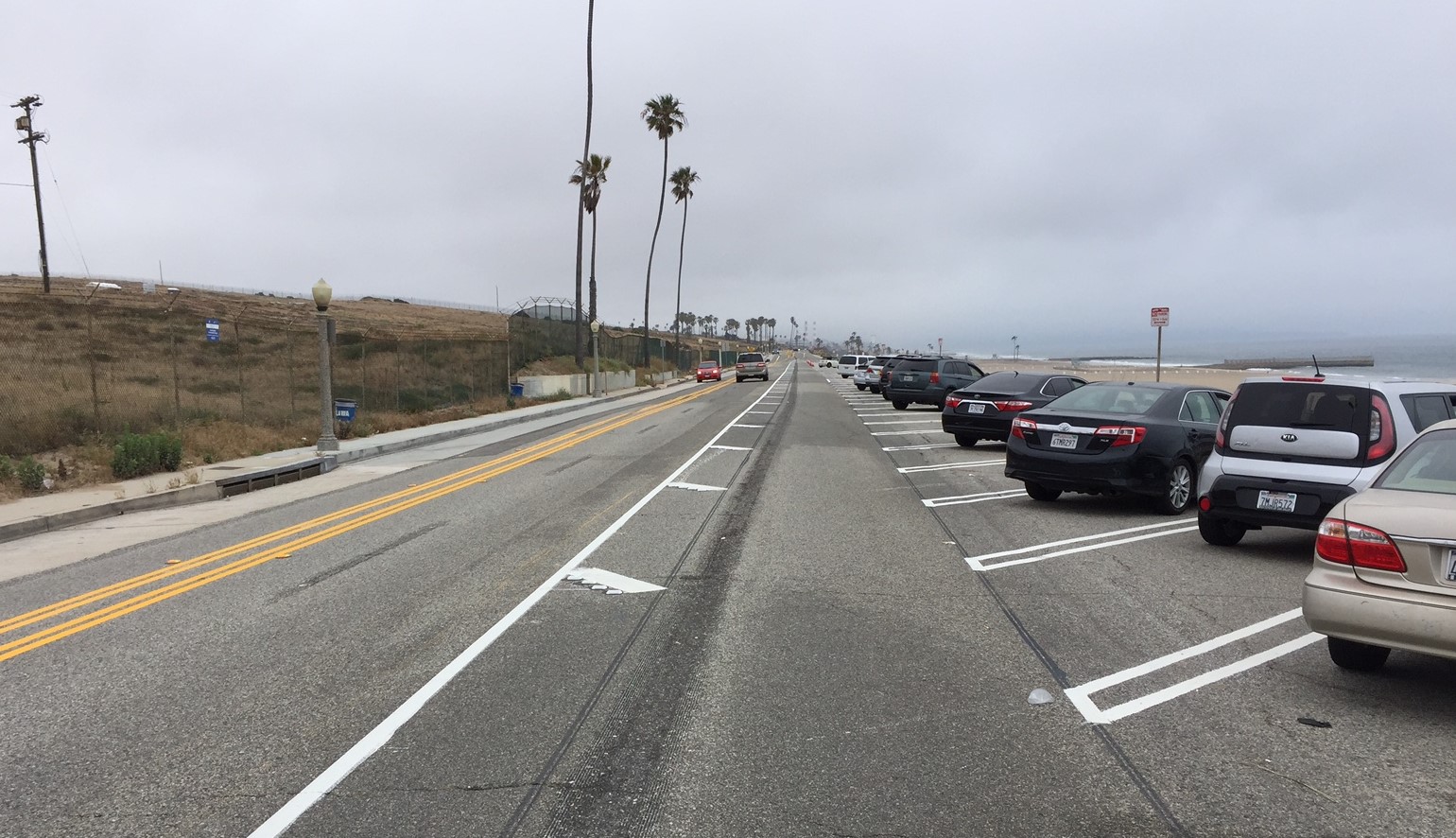 At the end of July, Councilmember Mike Bonin of Los Angeles’ 11th district announced that his office had arranged to remove 400 parking spots from Vista del Mar in Playa del Rey (above), replacing them with spaces in the County’s adjacent Dockweiler State Beach lot. The decision, which allowed for the restoration of a traffic lane in each direction, effectively signals the end of the safety project on Vista del Mar just two months after it was first introduced.

This is a disappointing setback for people who walk in Los Angeles. Despite having made tentative progress in recent years, people walking are still too-frequently expected to take risks with their personal safety in order to maintain the privilege of drivers to speed through residential neighborhoods and commercial corridors. Though the outcome is sad, hopefully Vista del Mar can serve as a teachable moment whose lessons will help protect safe streets projects for people walking, bicycling, and driving in other parts of the city.

Unlike other projects in the area, including the separate Safe Streets for Playa del Rey Initiative that introduced road diets on Culver Boulevard, Jefferson Boulevard, and Pershing Drive, the Los Angeles Department of Transportation (LADOT) undertook the reconfiguration of Vista del Mar as a result of the legal liability posed by the roadway’s deadly status quo. In April, the Los Angeles City Council settled a wrongful death lawsuit with the parents of Naomi Larsen, a teenager who was killed in a 2015 collision on Vista del Mar as she left the beach. The suit contended that fatal collisions were a “foreseeable” consequence of a road design that left pedestrians to fend for themselves on a miles-long stretch of road that had no crosswalks. With a similar lawsuit pending in the case of the 2016 death of Michael Lockridge and the summer beach season approaching, the City felt pressure to take immediate action and improve the safety of Vista del Mar.

The project, which was announced in May, sought to address conditions near Dockweiler State Beach by targeting the most dangerous elements of the existing design. Parking spaces were moved to the west side of the street to reduce the number of pedestrians crossing Vista del Mar. Illegal U-turns were mitigated by providing space for cars to turn around safely. Vehicle speeds were slowed by reducing the number of traffic lanes on Vista del Mar.

This last point about speed is especially key, as a new study by the National Transportation Safety Board has confirmed Vision Zero’s contention that controlling car speeds is essential to eliminating traffic fatalities. Speeding is a contributing factor to nearly one third of vehicle collisions and, as speed increases, people walking become much less likely to survive a car’s impact. Whereas 90% of pedestrians survive vehicle impacts at 20 mph, at 40 mph that number drops to just 10%. The study by the NTSB, the authority on safe transportation practices, found that insufficient attention and resources have been directed to the development and enforcement of safe speed limits.

The reconfiguration of Vista del Mar was not part of the City’s Vision Zero Action Plan, but it was carried out simultaneously with nearby projects in the 11th District: the Great Streets makeover of Venice Boulevard in the Mar Vista neighborhood, which was a priority listed in the Vision Zero Action Plan, and the aforementioned Safe Streets for Playa del Rey project, which was implemented in response to community concerns. While these projects had each been in development for several years, the Vista del Mar project did not receive the benefit of public outreach because of the imminent legal threat. Perhaps most importantly, this meant that the City lost an important opportunity to set a clear agenda for the goals of the project that included reducing dangerous car speeds on Vista del Mar.

Since their implementation, the three safe streets projects in the 11th District have each been the recipient of a furious and frequently vicious backlash. Public meetings regarding the roadway reconfigurations have not been civil or constructive, and have at times devolved into the open mocking of concerns for the safety of people walking and riding bicycles. Some of the loudest opponents of the Playa del Rey projects, from South Bay cities like Manhattan Beach, have been impervious to the argument that they have prioritized safety near their own homes, but regard their commuting time as more important than safety in other people’s neighborhoods.

In response, Bonin’s office has attempted to meet critics halfway. The Los Angeles Times said the agreement between Bonin’s office and Supervisor Janice Hahn had been called a “win-win” that would satisfy commuters and beachgoers, but the fact remains that a safe road redesign is being abandoned to cater to the loudest and angriest voices in the room.

The “win-win” solution on Vista del Mar is reminiscent of what Los Angeles has tried for decades -- a solution in which the very presence of pedestrians is seen as a problem that needs solving. Instead of making walking safer, we try to address safety by removing the walkers. History has shown that not only is this approach disruptive to the community, it also will never be fully effective. People will still walk across Vista del Mar, whether they are going to Vista del Mar Park, or walking from their home to enjoy a day at the beach, or for whatever other possible reason. The lack of lighting, lack of crosswalks, and low-visibility conditions from fog will still make it dangerous to cross, or walk along, a de facto speedway, but reverting Vista del Mar to its previous configuration simply ignores the existence of these people so South Bay commuters can resume speeding through the neighborhood.

In his video, Councilmember Bonin acknowledged the public safety crisis that traffic collisions pose in Los Angeles, and we commend his correct assertion that controlling speed is the most effective means of eliminating fatal car crashes, as we commend his championing of the Vision Zero initiative across Los Angeles. Councilmember Bonin has been a leader among the City’s elected officials in giving discussions of street safety for all Angelenos the weight that they deserve. But it is flatly disappointing that speed was not a primary consideration in terminating the road diet, just as it’s disappointing to hear the Councilmember call this project a “mistake.” Despite the vitriol that characterized the backlash to this project, this was a smart redesign that gave due consideration to protecting the lives of human beings.

In the long term, we will be pushing the City to create a permanent pedestrian facility on the west side of Vista del Mar, and to make sure that extra roadway space will not merely be left to encourage unsafe driving speeds. We are also hopeful that the task force Councilmember Bonin has announced to examine the community-supported Safe Streets for Playa del Rey Initiative will provide an opportunity for more productive conversations to take place. We believe that it is of paramount importance that design elements intended to protect pedestrians be protected throughout this process.