In 2015, Los Angeles Walks received funding from IOBY to develop a pilot pedestrian wayfinding signage system called Walk This Way/Caminale. Pedestrian wayfinding signs offer information on walking times between different destinations, and show connectivity between neighborhoods, changing perceptions that many places are too far away to walk. 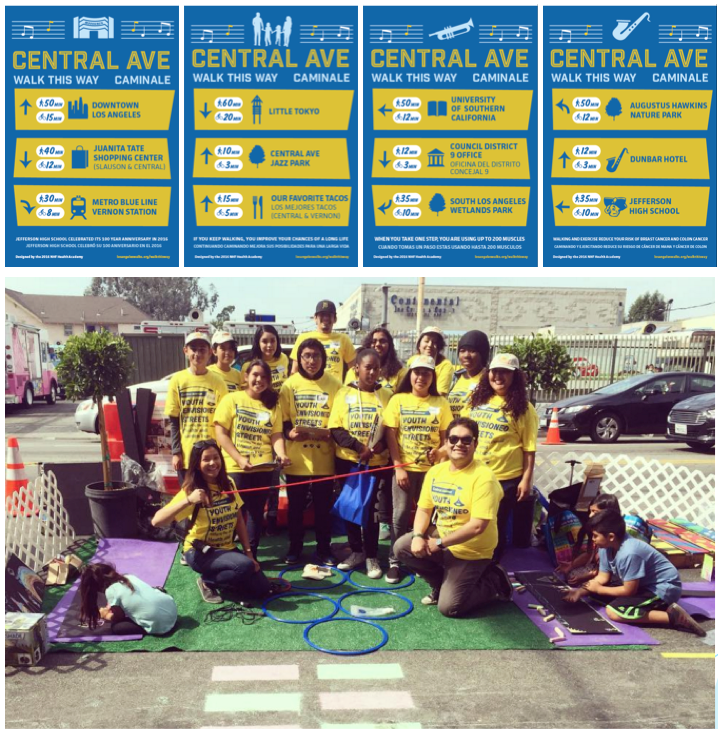 Above: (Top) Four of 11 wayfinding signs that can be found on Central Ave. (Below) Jefferson High youth conducted community outreach as part of the Youth Envisioned Streets event in February 2016, working with community partners, including A Place Called Home, Coalition for Responsible Community Development, The National Health Foundation, and LACBC. The event was part of Mayor Eric Garcetti’s Great Streets Challenge Grant program.

We would like to thank our many community partners who have supported and helped us in this effort:
Mayor Eric Garcetti's Great Streets program, Councilmember Price and all the staff at The New 9th, Los Angeles County Department of Public Health and Champions for Change, LADOT, Jefferson High School, The Youth Envisioned Streets Team (NHF, A Place Called Home, CRCD, LACBC, and LA Walks), This South Central Neighborhood Council, IOBY, The Central Avenue Business Improvement District, Community Health Councils, TRUST South LA, and many others who have helped along the way.

If you want to Walk This Way in your neighborhood, email us at hello-at-losangeleswalks.org. Tell us where you walk in LA!