Will Wright, who came up with the idea for a ‘wild walk’ and who is Director of Government and Public Affairs for the American Institute of Architects (AIA) Los Angeles Chapter, wanted to do something new. Unlike other group walks with Los Angeles Walks, this one had no route and no theme. Instead, we would allow our interests to lead us where we desire. In the end, we walked 9.6 miles and trekked over some public stairs, dirt roads and alleyways, and through a few parks. (Check out our entire route here.)

About 15 of us gathered at the Indiana Street station on the Metro Gold Line is East Los Angeles where Will shared the plan (or lack thereof) for the walk. Each person would lead the way as naturally flowed; we were encouraged to stop and point out any interesting architecture, public art, or other point of interest we saw. Will explained that the Wild Walk would only be successful if we got lost at least once (spoiler alert: we did). We also set a goal to use maps or phones as little as possible, which we mostly abided by.

To begin the Wild Walk, we oriented the group in the general direction of travel towards our intended ending point - South Pasadena, which was about 6 miles as the crow flies and a little over 7 miles using the most direct walking route.

Our first stop was the Pan American Bank on First Street, where we admired murals adorning the New Formalist building. We headed north and found ourselves back on Indiana, taking the newly built steps, connecting the street between Floral Drive and Folsom Street. At the top of the stairs, we stopped to admire Mr. Okuno’s El Pino, a living monument to East Los Angeles’ multicultural populations of the past, present, and future. 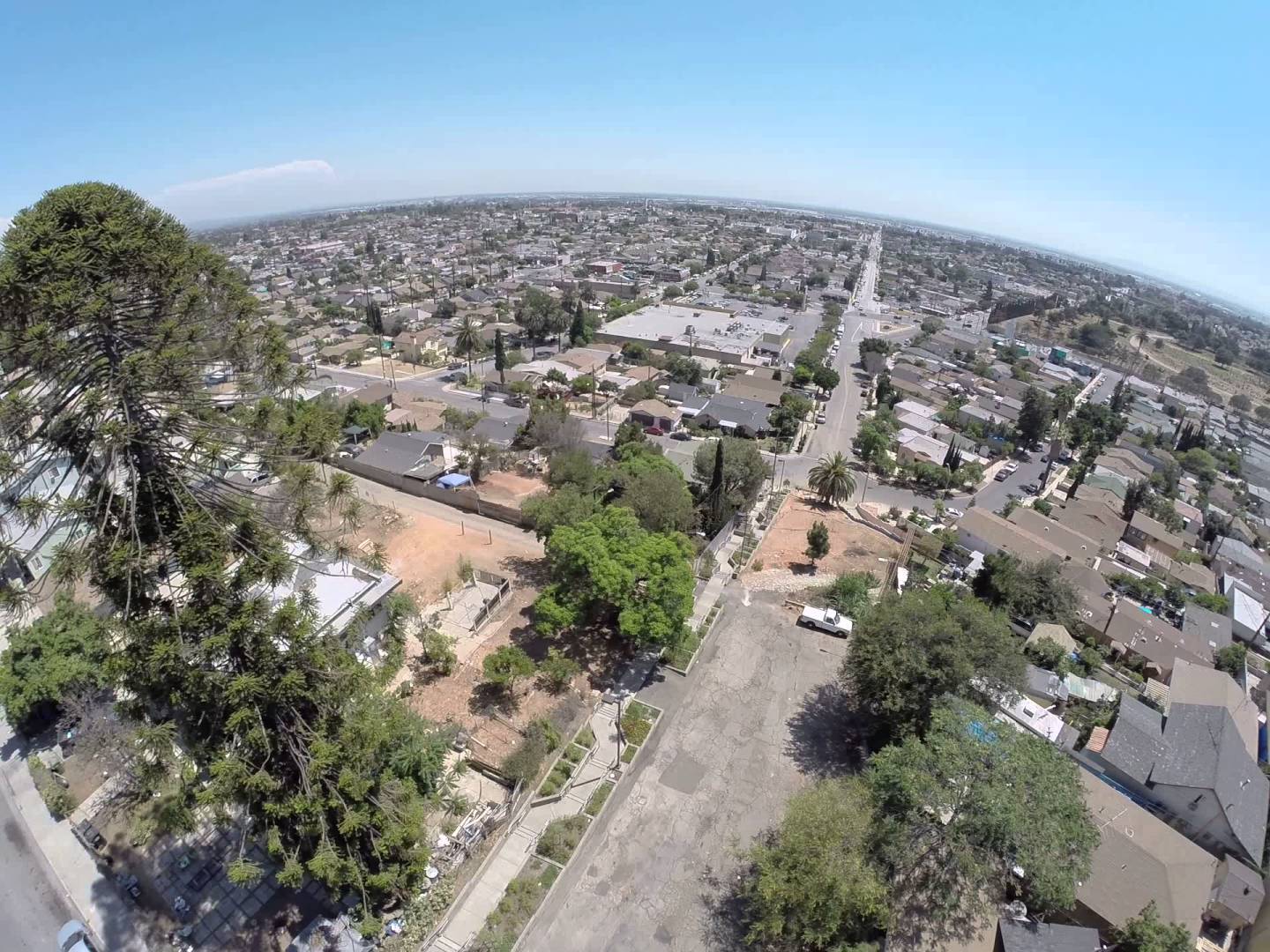 We continued north on Indiana Street’s alleyways, skirting the dividing line between the City of Los Angeles and the County of Los Angeles. At Fairmount Street we faced our first hurdle: a public stairway that had been illegally locked by residents. After the minor detour, we continued north where we saw a house on stilts, hovering high above City Terrace. The group was drawn to the precarious impossibility of the architecture, which led to our first real setback. We discovered Stone Street was a loop, forcing us to backtrack (mission accomplished).

After finding the pedestrian crossing for the I-10 along North Evergreen Avenue (not very pleasant), we took a pause for water and to play on the playgrounds at Henry Alvarez Memorial Park in Ramona Park. I led the group toward the corner of Indiana Street and Medford Street in the noontime sun, where we happened upon a gentleman selling Aguas Frescas. Sixteen thirsty walkers were happy to support a hardworking street vendor! 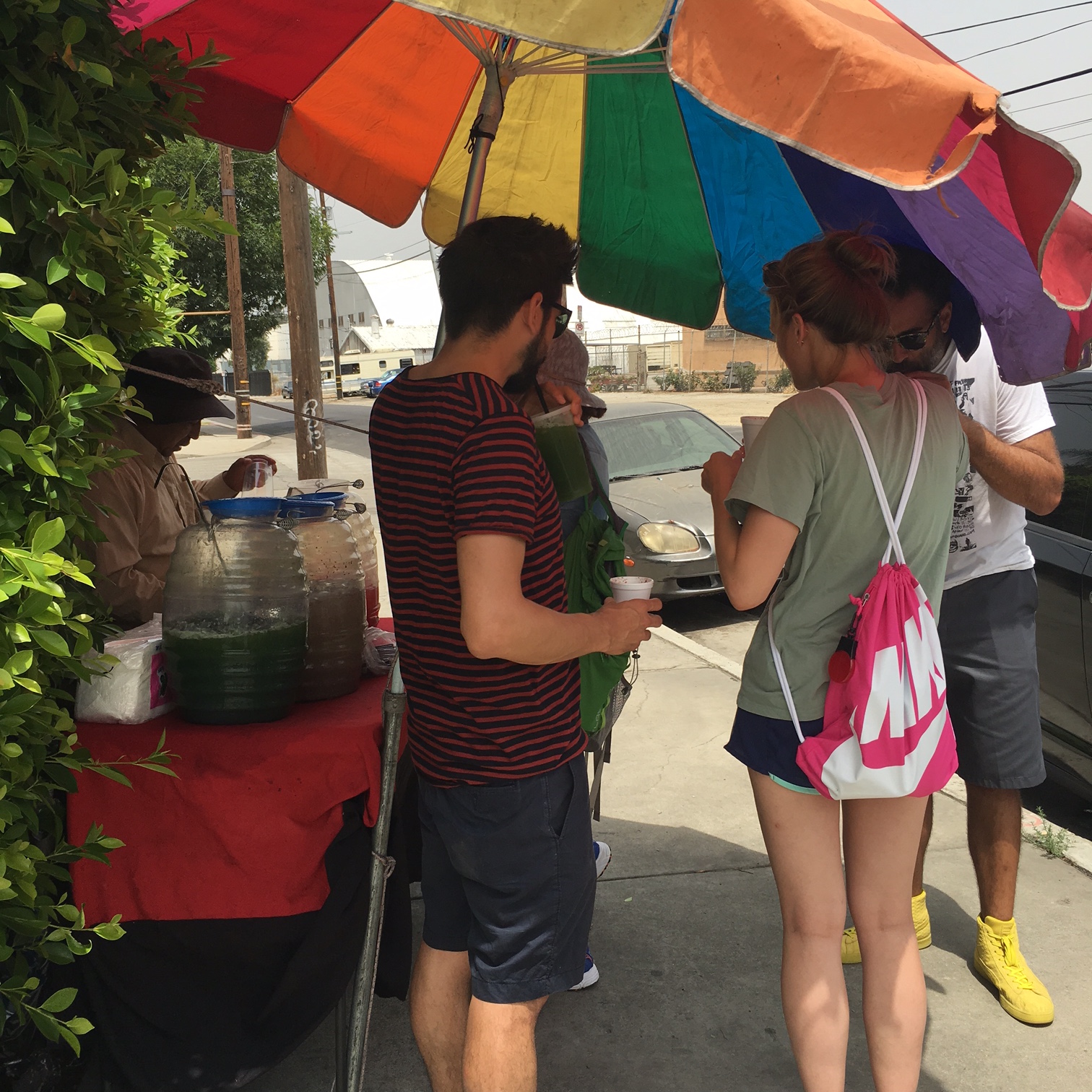 We walked along Soto Street, the western edge of Ascot Hills Park. The sidewalks were narrow; it was not the most pleasant to walk, but we continued northward. After joining Huntington Drive, we turned left onto Tourmaline, drawn to a very tall public stairway. At the top of the stairway, we happened upon a local resident, Javier, who some walk participants knew! We filled up our water bottles and took a bathroom break. Javier directed us to the overlook of Downtown Los Angeles on Rose Hill – a great view for sure.

At this point, most of us were losing steam, so we decided to head to the closest Gold Line Station, the Southwest Museum.  We walked along Amethyst Street to Ernest E. Debs Regional Park, where we walked up and over hills, stopping by Peanut Hill Lake, where we took a well-deserved break in the cool shade. We descended into the Arroyo Seco, crossing at the Bridge at Sycamore Park, where half of the group headed home from the Southwest Museum station, while the other half sought lunch,beer, and iced coffee along Figueroa Street.

In the end, we walked nearly 10 miles as a group, visiting over a dozen neighborhoods, with lots of great views and exciting locations along the way. There’s nothing better than walking - aimlessly - in Los Angeles!

Marc Caswell is a supporter of Los Angeles Walks and a Senior Planner at Alta Planning + Design.