Click here to read the LA Vision Zero Alliance policy platform and guiding values, a roadmap for the City to eliminate traffic deaths through an approach that is equitable, community-centered, and transparent.

Today marks two years since Mayor Eric Garcetti signed Executive Directive 10, formally launching the Vision Zero initiative in Los Angeles. In instituting its own Vision Zero program, Los Angeles joined a growing international movement based on the belief that traffic fatalities are always preventable and that saving lives is a compelling public interest that should govern how we design our road network.

Today is the 2nd anniversary of @MayorOfLA's directive establishing #VisionZeroLA! Here are just a few examples of what we've done since... pic.twitter.com/rlF7byzIXn

As Mayor Garcetti put it on signing Executive Directive 10: “Fatalities are not a tolerable byproduct of transportation. Loss of life and severe injuries resulting from traffic crashes are unacceptable outcomes that we can address.” Vision Zero is about prioritizing the safety of Los Angeles’s community members regardless of how they move around the city. But Vision Zero is more than just a statement of intent. It is about the complete elimination of fatal crashes in the City. Mayor Garcetti’s Directive laid out a benchmark goal of reducing fatalities by 20% in 2017, and reducing them to 0 by 2025. This is an ambitious goal that requires funding and action.

Los Angeles Vision Zero has a mixed record of achievement in its first two years. City leaders, led by Councilmembers Mike Bonin, José Huizar, Marqueece Harris-Dawson, Paul Krekorian, and Nury Martinez, recently renewed their commitment to Vision Zero in increasing funding to the program from $3.5 million to $27 million in the current budget year. This money will help give L.A.’s most dangerous streets the life-saving makeovers that they need. The increase is all-the-more important as previous funding levels have been decidedly insufficient for meeting the City’s stated goals. Far from meeting the preliminary goal of a 20% reduction of traffic deaths by 2017, the number of fatalities on Los Angeles’ streets has continued to grow. The number of people killed by vehicles while walking this year has increased by nearly a quarter since last year, and by more than two-thirds from 2015.

The new infusion of financial support could make a major difference, though, as it complements the work that has been undertaken by Vision Zero and the Los Angeles Department of Transportation to date. In the first two years, LADOT has conducted data analysis and safety studies for Vision Zero, culminating in the development of a Vision Zero Action Plan, which prioritizes project implementation for projects citywide based on what is called the “High-Injury Network” of streets. City staff has determined that 65% of fatal collisions occur on just 6% of L.A.’s streets, which make optimum targets for Vision Zero investment due to their unsafe design and high levels of pedestrian activity.

Based on the Action Plan, LADOT has identified 40 corridors for upcoming improvements. As Phase 1 of implementation, Vision Zero has resulted in the installation of 404 new crosswalks, 109 new speed feedback signs, and 117 new intersection tightenings (below). 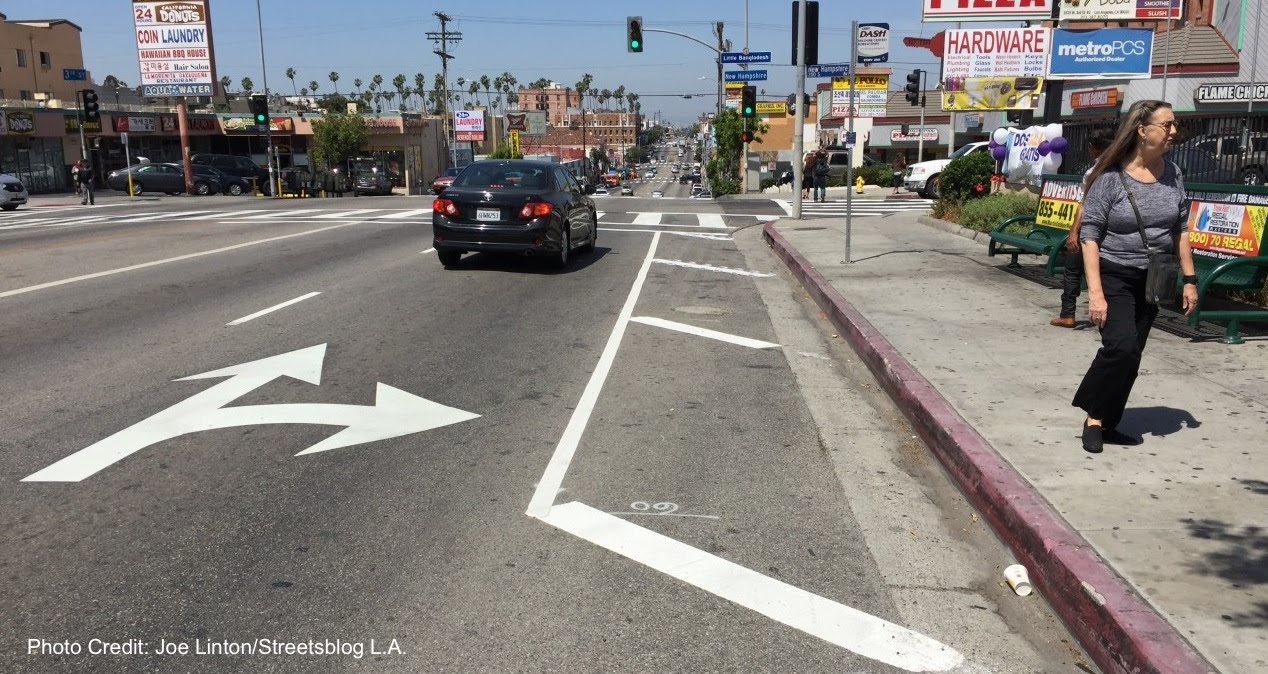 During the past two years, Vision Zero has also been the subject of a brand awareness marketing campaign and a community-based education and outreach campaign on specific corridors. LADOT has also developed an online tool to map the impact of traffic deaths, while showing its commitment to the program by growing its dedicated staff to more than 10 people.

Vision Zero should carry with it a sense of urgency, because the status quo is deadly. Two hundred and seventy three people have been killed or seriously injured this year alone after being struck by a car while walking. Over the course of the past two years, the Los Angeles Vision Zero Alliance, coordinated by Los Angeles Walks, has sought to keep that urgency squarely in focus for city officials. The Alliance has pushed the City to improve in three main areas of emphasis:

This week, as the City marks the anniversary of its Vision Zero program, the Vision Zero Alliance releases its policy platform and guiding values, which will shape advocacy efforts for the 20+ member coalition going forward. The Alliance will use the platform to monitor, track, and evaluate Vision Zero initiatives by relevant City departments and among elected officials.

The Alliance presses the City to distribute Vision Zero investments equitably, prioritizing “low-income communities of color - residents who are most at risk of being hit by a car because of current street conditions and a history of disinvestment,” said Monique López, Deputy Executive Director of Advocacy at the Los Angeles County Bicycle Coalition. “We also need to make sure that strong policies are in place and resources available for anti-displacement measures, so residents are not priced out of their neighborhood once street improvements are made.”

The policy platform is being released at particularly important time for Vision Zero. LADOT is quickly updating the speed surveys that will allow the Los Angeles Police Department to resume enforcing speed infractions in the city. LAPD has created a deployment plan for speed enforcement, but has thus far not made that plan public. The Vision Zero Alliance is concerned that traffic enforcement efforts under the Vision Zero banner could result in the continued over-policing of Black and Brown residents, as seen in Sacramento and Chicago Vision Zero enforcement strategies. “It is problematic for the City’s Vision Zero initiative to subject residents to increased police presence without acknowledging the legacy of racist land use policies evidenced by inadequate and unsafe street infrastructure,” said Megan McClaire, Director of Health Equity at the Advancement Project California, and Anisha Hingorani, Program and Policy Manager at Multicultural Communities for Mobility, both Vision Zero Alliance member organizations. “We urge the City to prioritize investments in design over enforcement, and require that LAPD commit to a ‘no racial profiling pledge’ to explicitly address the historic practice of over-policing and disproportionate enforcement of communities of color.” 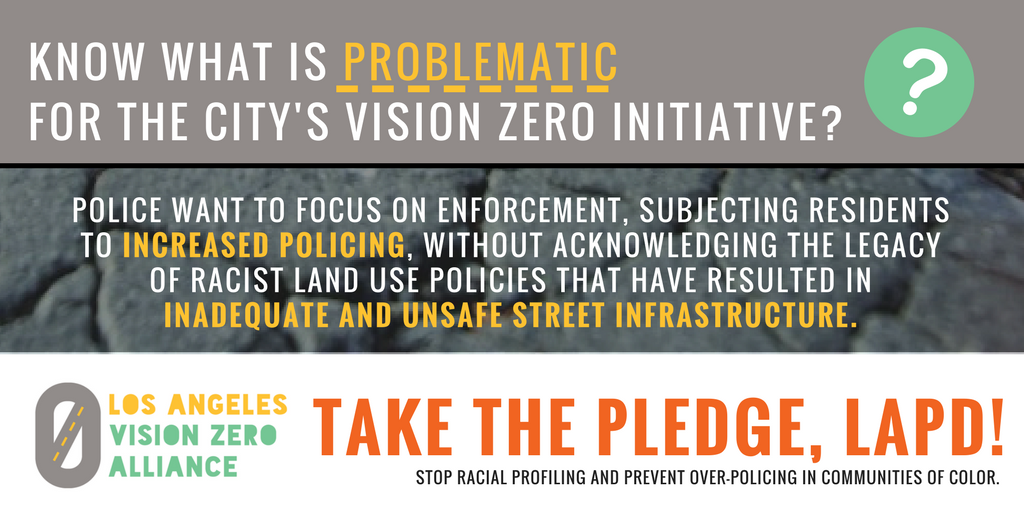 The Vision Zero Alliance also believes that it is critical to engage community members in the development, implementation, and evaluation of roadway redesigns. The Alliance believes that the City must develop guidelines for deep, culturally and linguistically competent engagement in order to ensure that Vision Zero projects can be effectively integrated into the community where they will be located.

The stakes are high, but the Alliance believes the City can achieve Vision Zero, despite the recent pushback that has been seen on the Westside. The Vision Zero Alliance is committed to helping the City to achieve Vision Zero, and offers its policy recommendations as a means of eliminating traffic fatalities in an equitable, community-centered, and transparent way.