Roll With Me: A Different Perspective on Pedestrian Travel in L.A. 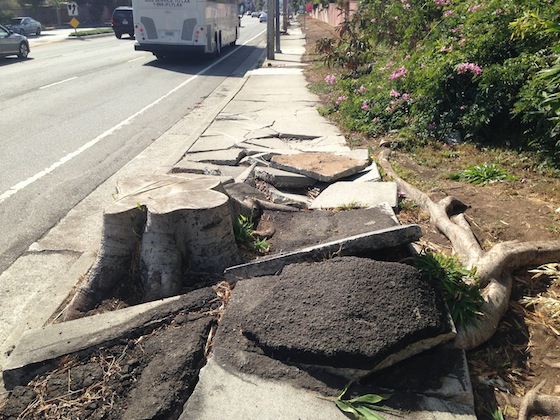 Like many of you, I prefer getting places without driving whenever possible. There’s a convenience store, a family taco stand, and a coffee shop a few blocks from my house. I live across the street from a park where I take my dog, and if I need a bus, there are two stops close by. All I need to do to get there is head down the middle of the street.

Why, you may ask, would a guy in a wheelchair brave busy Blake Street, going head-to-head with semis who seem to be on their way to Fast and Furious 18? The tacos are good, but c’mon, I’m risking my life for that al pastor! My nice convenient neighborhood is, in many ways, a microcosm of the problems associated with pedestrian travel for people with disabilities in L.A. There’s a good chance that you’ve actually seen people in wheelchairs or scooters on the road before. Trust me, these are not people trying to start some kind of impromptu disability rally or Critical Mass: Wheelchair Edition. They are simply pedestrians who do not have the physical ability to maneuver through the labyrinth of cracks, holes, and other obstacles that litter city sidewalks. Although incredible progress has been made in the realm of public access since the Americans with Disabilities Act was signed into law in 1990, there is no regulatory body roaming around ensuring that standards are being upheld. That being said, sidewalks that were completely accessible via wheelchair when the concrete was poured in the 90s may today look like a demolition crew just took a lunch break.

Many sidewalks contain sections at outrageous angles that have made me question just how close I am to the San Andreas Fault. Cracks and holes are more prevalent than cigarette butts and occasionally there are entire chunks of concrete missing or pulverized. Signposts are sometimes placed in the middle of the sidewalk, making it impassable for wheelchair users. Most repairs to these damages are quick-ﬁx bandaids that don’t last long. “I know! Just throw down some asphalt!” I’ve encountered plenty of areas such as these that force me to head back to the corner and take the street to get around.

When I get a wild hair to head out and take on the mighty beast that is the L.A. sidewalks, it’s even more frustrating when I can’t even reach them. There are still corners at plenty of intersections that don’t even have curb cuts. When a corner actually has one, it’s a small miracle when the slope complies with federal standards. I’ve struggled up plenty of steep ramps like this throughout the city and simply avoided those that I knew would tip me over if I so much as attempted it.

These are just a handful of the reasons why people in wheelchairs take to the streets in Los Angeles. And this is a huge population. Data from Metro shows that there are over 85,000 wheelchair boardings on buses alone each month, far more than in New York City’s entire public transportation network (which, I should add, has seven times the overall ridership). While these are boardings, not separate individuals, the point is clear: the number of wheelchair users in L.A. is huge and they get out in the community.

But these aren’t the only pedestrians who rely on quality sidewalks. Grandma sure as hell isn’t going to get too far with her walker in conditions like these. Moms who didn’t think they’d need a Jeep-brand all-terrain shock-absorbing stroller with three inch wide knobby tires to get their babies around are out of luck, too. Oh, and let’s not also forget folks who are blind. Imagine the frustration of relying on a white cane for sight when every other section of concrete feels similar to the yellow safety bumps found on new curb cuts. I should mention also that I use a pretty compact manual wheelchair. Anyone who needs a powerchair or scooter to get around really has it rough because their devices are larger, further complicating navigation through the rubble. These devices are also way heavier, so if someone gets caught up on something they may be stuck there until the rescue team arrives. One advantage that these folks have over me, however, is more speed on the road!

Ultimately, all of these factors go beyond difficulties and limitations for pedestrian travel in a wheelchair. This is an overall public safety concern for everyone walking down the sidewalk who isn’t carefully analyzing their next step. And it’s an issue that needs serious consideration. So what’s the solution? The second largest concern from voters during the mayoral campaign last year was the condition of roads in the city—but what about the sidewalks? Clearly we favor the automobile in Los Angeles. But as more of us find our footing and wander about to enjoy this fair city and its beautiful climate, we should demand a more comprehensive approach to the design of our transportation network. That is, one that takes into consideration all users.

And for anyone out there who has yet to see the light, I offer this invitation: I can’t walk a mile in your shoes, but any time you want to take a spin in my wheelchair you can—just bring a helmet.