Back at the Tripping Point: Building a Visible Constituency for Complete, Safe Streets

It’s been almost four months since Los Angeles Walks joined Investing in Place and other partners to host the Tripping Point, which, as far as we know, was LA’s first advocacy training summit focused on complete street issues, like sidewalks, bus stops, crosswalks, and street trees.

On Saturday, October 21st, we’re at it again! RSVP NOW for the free Tripping Point 2: The Valley! 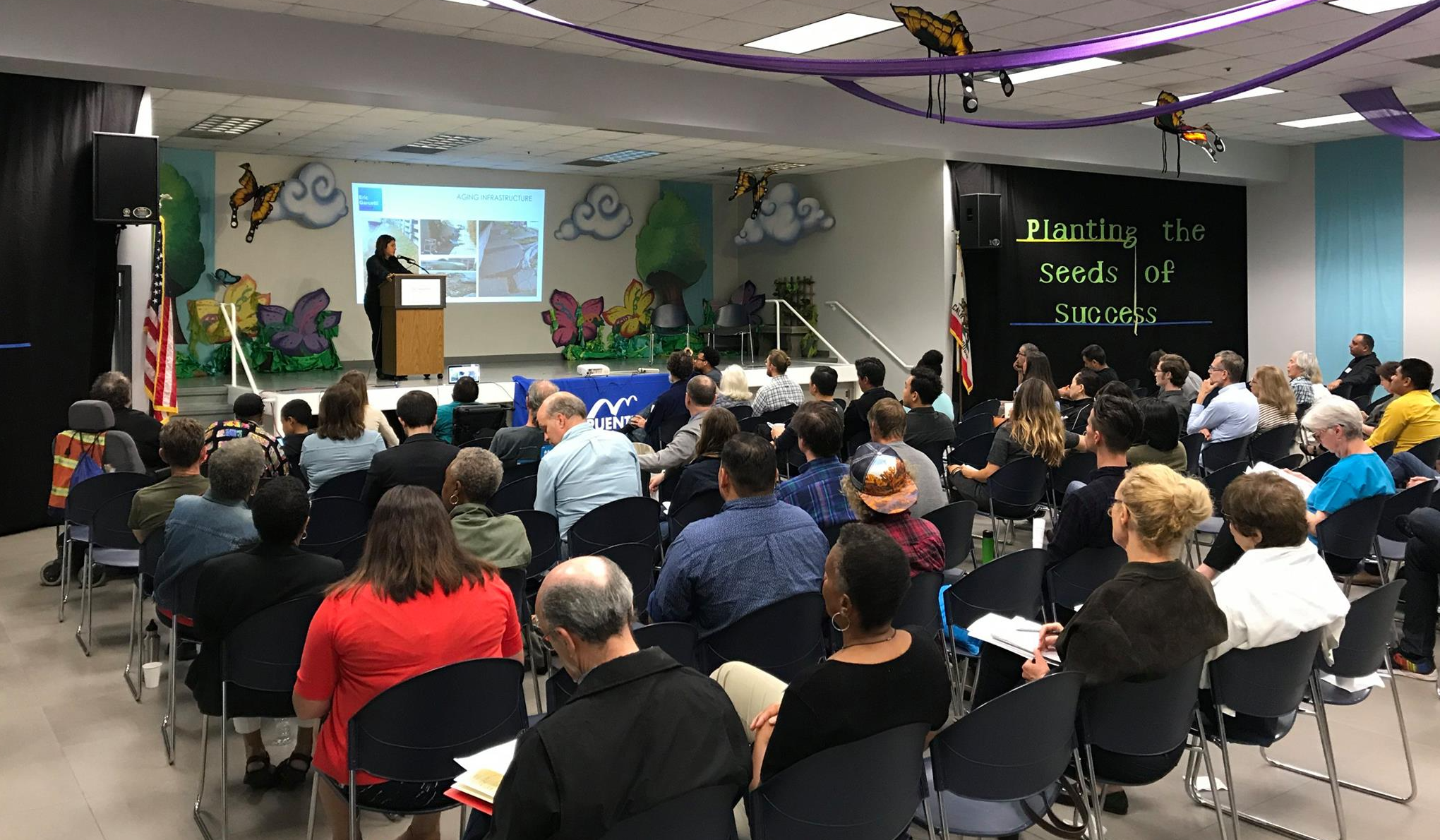 Since the first Tripping Point, safe and complete street issues have gained significant attention as Los Angeles embraces the challenge to create safer neighborhoods by reorganizing streets and public spaces.

Based on the turnout at the first Tripping Point, we know that the demand for healthy, active communities is out there. And based on our experiences over the past four months, we know how critical it is to voice and make visible the demand for updated streets and sidewalks that serve everyone’s needs.

So, led by Investing in Place, LA Walks is co-hosting the Tripping Point 2: The Valley edition along with AARP, the American Heart Association, the Department of Neighborhood Empowerment, Koreatown Youth & Community Center, LURN, Outfront/JCDecaux, and Southern California Resources Services for Independent Living.

To set the stage, we’re providing a recap here of the first Tripping Point, held on June 10th, when over 150 people from all across the city came together at El Puente Learning Center in Boyle Heights for workshops and skill-building sessions.

For the Tripping Point 2, on October 21st, we’re also adding that participants will connect with one another to leave with a local network of fellow activists and allies. 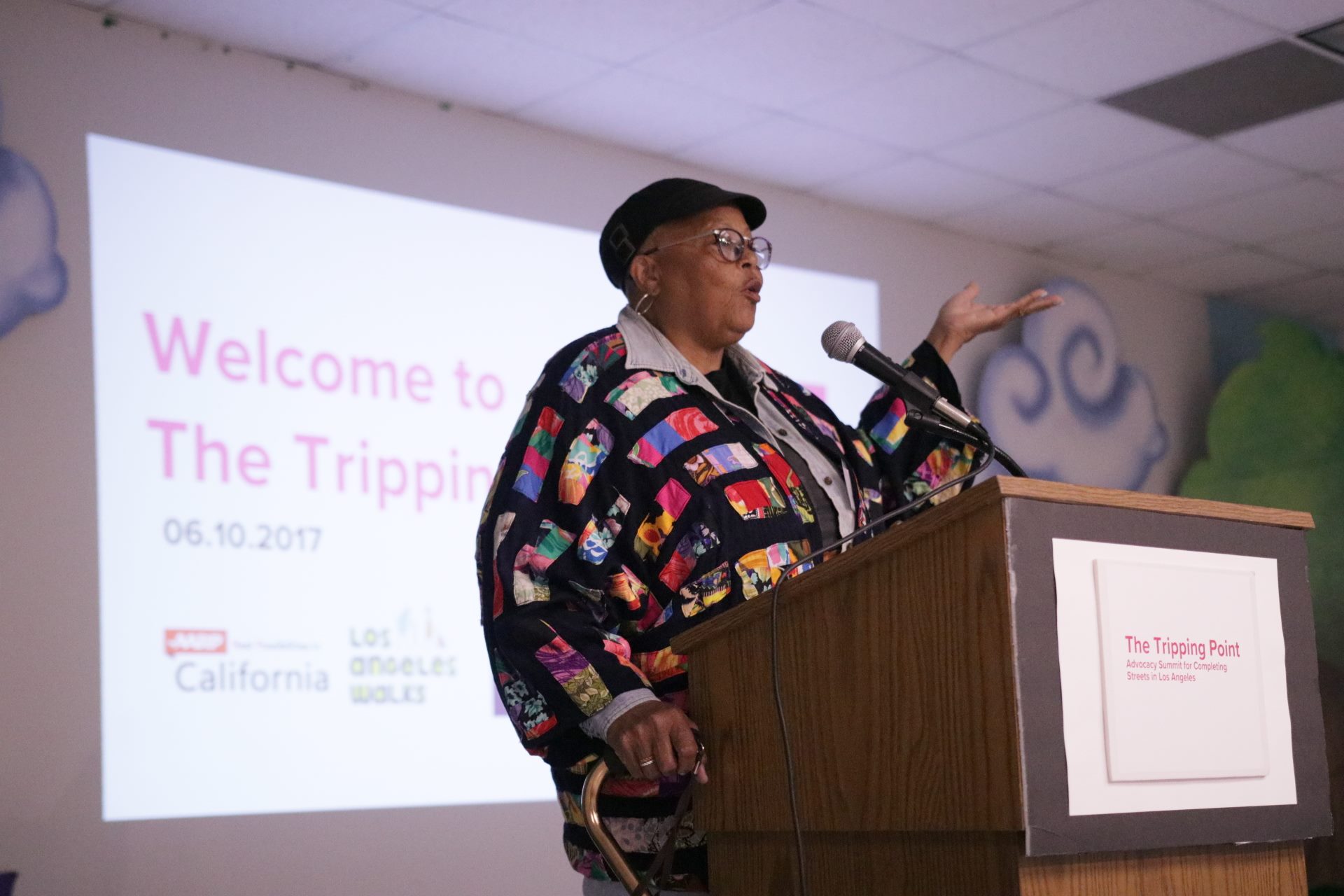 Throughout the day, experts from community-based organizations and advocacy groups offered a slew of sessions, all offered in Spanish and English. Topics ranged from how to request a bus stop shelter to how to communicate effectively with elected officials. Attendees learned about stormwater capture, the urban tree canopy, and more.

Los Angeles Walks offered two sessions, both centered on connecting individuals with one another in order to build community power. First, during “Hands-On Walk Audit,” we taught participants how to conduct a walk audit and we shared a basic tool for coordinating a walk audit in their own neighborhoods. A walk audit can be a very detailed exercise that focuses on intense data collection. But, it can also be an opportunity to build relationships, share an experience, and establish common interests among community members -- all steps toward building community power to create local change.

For the second session, America Aceves of Proyecto Pastoral led a training in community organizing called “Organizing for Change: The Power of Relationships.” America dove straight into what power is and who has it, how to create change through individual and institutional transformation, and what exactly organizing entails: community listening, research, action, and evaluation. We explored leadership and how to identify and develop leaders; learned how to conduct a “one-on-one,” the foundation of relationship-building in community organizing; and we each practiced telling our personal story, a useful skill for connecting with neighbors and decision-makers.

As an advocacy organization working to make Los Angeles a safe, equitable place to walk, Los Angeles Walks is, of course, focused on public policy, like the City’s sidewalk repair program, Safe Sidewalks LA, as well as Vision Zero and Mobility Plan 2035. But, increasingly, LA Walks is focusing on developing relationships and building people power. Recent events in Westside neighborhoods confirm that this is the way to go: only one week after the Tripping Point was held, vocal opposition erupted in response to the Mar Vista Great Streets Initiative project on Venice Blvd., the Safe Streets Playa del Rey road redesigns, and the Vista del Mar reconfiguration. The situation required intense mobilization and organizing of safe street supporters in the area.

In the months after, LA Walks joined the Los Angeles County Bicycle Coalition in making visible the constituency for safe streets in Council District 11: we identified supportive stakeholders and community members, trained residents in how to provide public comment at a community meeting, encouraged constituents to email their elected officials in support of Vision Zero and roadway redesigns that control speed, and organized 60 people to attend and speak at the Mar Vista Community Council meeting.

The immediate outcome was positive: the Mar Vista Community Council voted to keep the Venice Blvd. project in place in order to allow the City time to conduct a thorough evaluation. But, opposition to street changes remain, which has led to the reversal of safety projects already in place and the threat to block projects currently in the works.

Now is the time to build our skills and our power as community members who know that another world is possible:

RSVP today for the Tripping Point 2: The Valley edition on Saturday, October 21 from 9:30am to 2pm. Boost your advocacy skills, meet like-minded people, and leave inspired to create a safer, healthier city. See you there!

Find info on the Tripping Point 1 below:

Funding for LA Walks' breakout sessions at the June 10, 2017 Tripping Point was provided by a grant from the California Office of Traffic Safety, through the National Highway Traffic Safety Administration.