From Analysis to Action : The LA Vision Zero Action Plan is Out

The Action Plan outlines the City’s strategy for reducing traffic fatalities by 20% by the end of 2017 -- the initial benchmark of the ten-year Vision Zero initiative Mayor Eric Garcetti launched in August 2015 through Executive Directive 10. 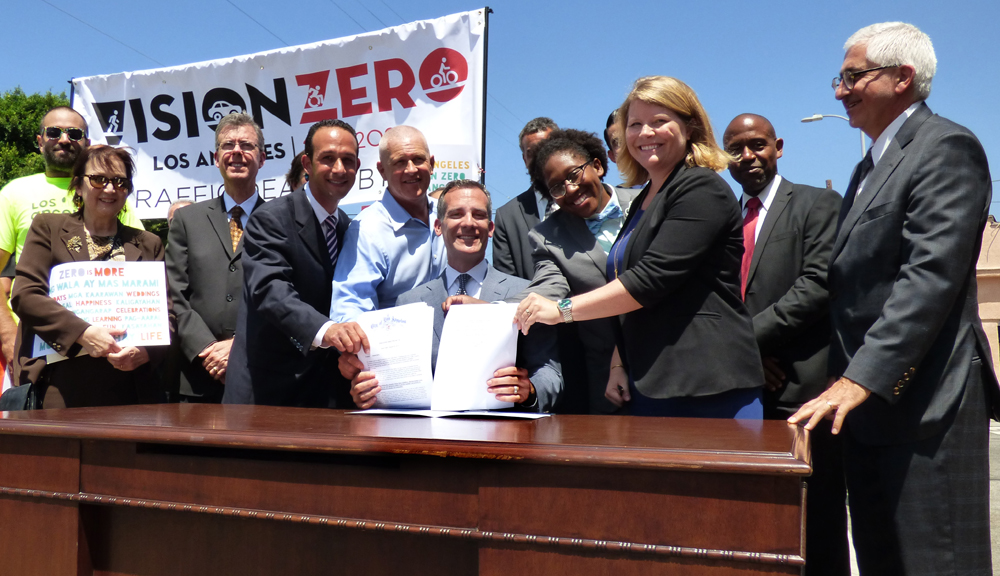 Ultimately, Vision Zero aims to eliminate all traffic fatalities and serious injuries in the City of Los Angeles by 2025.

The Action Plan arrives after LADOT, in collaboration with the Los Angeles County Department of Public Health, spent more than a year analyzing collision data in order to thoroughly understand the problem of traffic crashes in Los Angeles. Here in LA, more than 200 people are killed and close to 1000 people are seriously injured in traffic every year. Alarmingly, motor vehicle crashes are the leading cause of death of children between the ages of 5 and 14 in Los Angeles.

As the Vision Zero Action Plan states, Los Angeles is facing a public health crisis. Pedestrian fatalities in Los Angeles jumped by almost 50% between 2015 and 2016, mirroring nationwide trends. At this rate, reducing traffic fatalities by 20% in 2017 will simply bring Los Angeles back to 2015 levels, no lower.

The need for a clear Vision Zero plan, followed by swift action, is urgent.

The City intends to address this crisis - and achieve Vision Zero - by focusing on four outcomes:

As we said at today's Transportation Committee meeting, Los Angeles Walks appreciates the complexity of this multiagency effort and applauds LADOT for moving from analysis to action. We have concerns, though, related to funding levels, speed management, and the safety of older adults.

Los Angeles Walks is encouraged to see the prioritization of evidence-based engineering projects within the City’s Action Plan outcomes. We are concerned, though, that the benchmarks listed within the Plan focus heavily only on completing design plans. The action items listed do not convey the extent to which evidence-based engineering projects will actually be implemented and built across the city, with the exception of concrete pedestrian islands and high visibility crosswalks.

The Action Plan’s ambiguous engineering commitments may be due to the woefully inadequate funding currently dedicated to the Vision Zero initiative: only $3 million in 2017.

In order to achieve a 20% reduction of severe and fatal injuries for people walking and bicycling, the City will focus its initial efforts on eliminating deaths on a set of priority corridors in the city. The Action Plan lists 40 priority corridors that cover 90 miles throughout Los Angeles.

At today's Transportation Committee meeting, LADOT General Manager told City Councilmember Mike Bonin that realistically it will take $77 million more this year to achieve that 20% reduction along those 40 corridors. As the Action Plan states, “As the city with the most traffic deaths per capita, funding for solutions must match the severity of the problem.”

More broadly, the Action Plan does not adequately address speeding, widely known to be the fundamental factor in crash severity. Though the Plan clearly states that “we can stop deaths by focusing on controlling vehicle speeds,” the Plan does not present a clear strategy for reducing speeds, either by wresting control of local speed limits from the State (as other U.S. cities have accomplished) or by redesigning roadways to reduce speeds (see "Funding" above).

The Action Plan lists nine High-Injury Network intersection projects currently in progress, but those projects seem to do little to address speeding along the wide mini-freeways that criss-cross Los Angeles neighborhoods. The City is well aware that an effective Vision Zero initiative must prioritize speed management above all else. We hope to see the implementation of engineering projects and advocacy towards state legislation that reflect this understanding well before 2020. 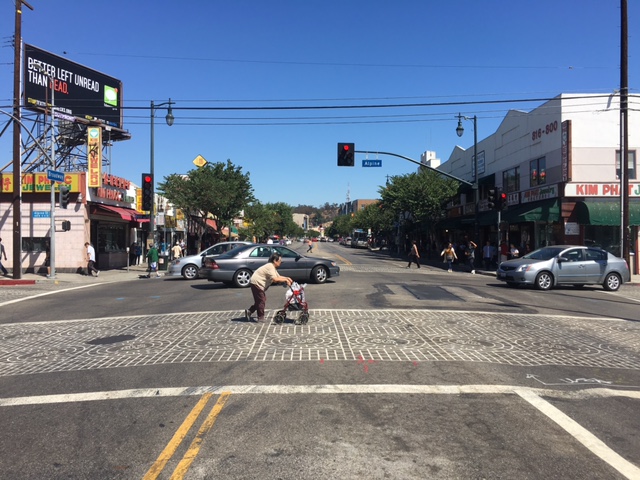 The Action Plan is strong when it comes to protecting the safety of school-aged children through Safe Routes to School programs and projects. The Plan does not present an equally bold or well-funded plan to address the needs of older adults, though, and doesn't mention how Vision Zero will support Purposeful Aging Los Angeles.

In Los Angeles, the pedestrian fatality rate per 100,000 people is highest among those age 75 and older, followed by those age 65 and older. Seniors are far overrepresented in fatal crash data. In 2015, when people age 65 and older made up 15% of the population in LA, they made up over 29% of the people killed while walking. Seniors are the most rapidly growing population in Los Angeles. As the number of older adults expands, the City must act quickly to address the specific needs of this vulnerable group.

Finally, any effort to reduce swift vehicle movement or redesign congested streets in Los Angeles, even if to save lives, will result in push-back from those resistant to change. With the release of the Vision Zero Action Plan, and the clear urgency of traffic crashes, which claim more lives every year than gang violence, Los Angeles Walks calls on City Council members to champion this cause within their districts.

1. Recommends the Council adopt the Plan
2. Recommends the Council robustly fund the Plan in the budget this year
3. DOT is asked to:
- Regularly report on implementation of Action Plan, including data on assessments and impact, to Transportation Committee
- Regularly report on anticipated funding needs of continued implementation
4. DOT and/or LAPD to report back in 60 days on:
- DOT to report more info on a plan/progress on increasing community engagement, particularly within underserved areas
- LAPD and LADOT to report jointly on a City of LA version of Focus on the Five traffic citation report (cited example from San Francisco)
- LAPD to report in 60 days on a timeline of development of the software and reporting system to enhance data transparency
- LAPD to report in 60 days on the status of the "no profiling" pledge (cited Portland example)

The hallmarks of Vision Zero are the prioritization of human life above all else and the collaborative effort across agencies, departments, and legislative bodies in order to preserve life.

Los Angeles Walks looks forward to working with the Mayor's Office and City Council members to identify funding opportunities, to educate residents on effective evidence-based countermeasures that save lives, and to help develop a culture of safety on Los Angeles streets. As the lead organization of the LA Vision Zero Alliance, Los Angeles Walks is committed to collaborating with City agencies, elected officials, community organizations, and residents to eliminate traffic deaths in our city, and bring more life to streets and sidewalks across Los Angeles.