Today, on Tuesday the 24th of November, the Los Angeles City Council is set to take up an amended version of Council File 20-1376. This ordinance purports to amend Section 41.18 of the Los Angeles Municipal Code (which makes it illegal to sit, sleep or lie down on the sidewalk) in a way that would pass muster under the decision in Martin v. Boise, a Federal court case that determined that such a blanket ban was unconstitutional. In the immediate term, thanks to the tireless effort of activists, the City Council seems to be not voting on the item today.

This draft ordinance is a dangerous and gross misadventure on many levels. At the most fundamental level, this ordinance, and the existing code section it purports to amend, violate the right to exist in public space, otherwise known as freedom of movement. It is also a sad extension of anti-vagrancy laws and other measures to ensure a white, landed, supremacy; a gross misallocation of legislative focus and effort; and a call for a massive increase in proactive, punitive LAPD presence in our streets when they already have such an overbearing presence.

This city shows two faces: a long history of abdicating responsibility for building and maintaining accessible sidewalks, and now, a sudden urgency in sweeping away those suffering homelessness to ostensibly ensure accessibility.

In addition to these many awful aspects of the ordinance, the rationale given for the ordinance (why we “must” enact draconian laws prohibiting sitting or lying in the public right-of-way) is that the City has a duty to provide accessible sidewalks, and that this is the way to do it.

This deserves to be contested.

While Los Angeles Walks and Investing in Place would certainly argue that the City of Los Angeles has a duty to provide and maintain accessible infrastructure for people walking and rolling since our sidewalks are part of the public right-of-way and our transportation network, the City itself says it actually has no duty to do so.

The City demonstrates--through its current ordinances, policies, guidelines and enforcement (or lack thereof)--that there is no real interest in providing or maintaining accessible public rights-of-ways. This city shows two faces: a long history of abdicating responsibility for building and maintaining accessible sidewalks, and now, a sudden urgency in sweeping away those suffering homelessness to ostensibly ensure accessibility. While we have long urged the City to support a walkable and rollable City for all, we must call out their current move to disingenuously use accessibility as a cudgel to sweep away both the people suffering homelessness and their personal belongings--it is gross and cruel.

Los Angeles Says it “Takes no Responsibility for Issues”

On August 26th, 2016, the City of Los Angeles reached a final settlement with plaintiffs in the Willits case, a massive, multi-year class action lawsuit against the City for failing to provide and maintain accessible paths of travel for people with mobility disabilities. The City agreed to spend $1.3 billion over 30 years to repair broken sidewalks and resolve accessibility obstacles.

Just like white collar crime settlements from big financial firms, the City made no concession that it had violated any Accessibility Laws, and stated that it had no responsibility to “build, fix, or remove barriers to access” (Willits Settlement, III(2), pg 7).

This was the biggest lawsuit about accessibility that the City of Los Angeles has ever faced, and their response was, “Sure, we’ll pay, but we didn’t do anything wrong and we actually don’t have to do anything”.

if fixing our sidewalks was so urgent, we would not be able to defer expenditures because we would have to fix as much as we can in a short period of time

Besides this blanket statement that absolves responsibility, we also find it hard to believe the claim for urgency in the draft ordinance (Section 5: Urgency Clause) to amend 41.18 that states that “The City also must immediately strengthen its laws that promote accessible public rights-of-way under the Americans with Disabilities Act” due to the 30 year schedule and numerous loopholes provided in Willits itself.

Of the two major loopholes in Willits we’d like to quickly show, the first is that the City can defer expenditures to future years within the 30 year compliance period. 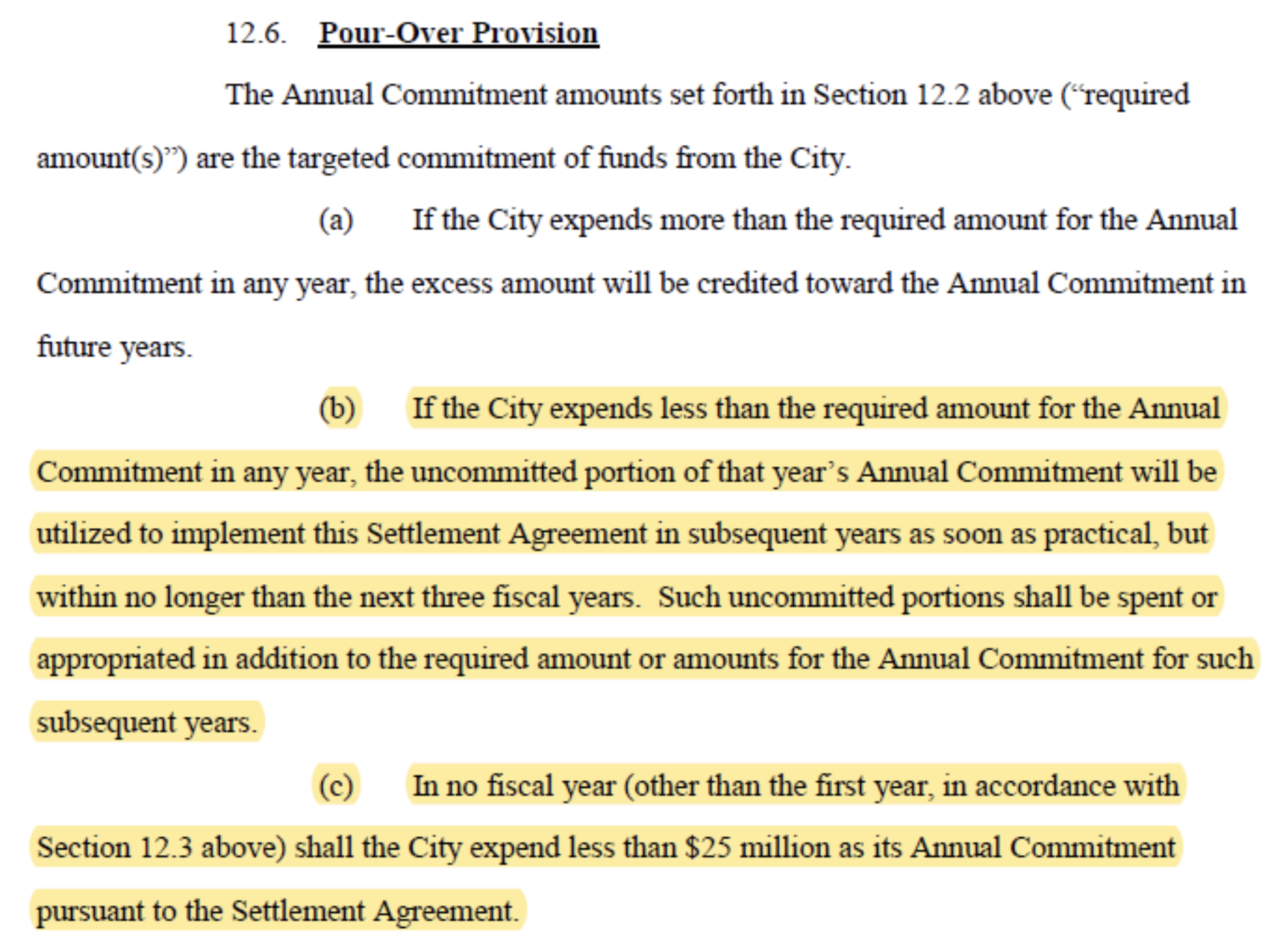 While financial flexibility makes sense to a certain extent, it definitely belies the case for “urgency”--if fixing our sidewalks was so urgent, we would not be able to defer expenditures because we would have to fix as much as we can in a short period of time.

Second, there is a major loophole for making fixes. Namely, if fixing a path of travel would be “technically infeasible” which includes the repair being too expensive, it can be exempted if an alternate path of travel within 200 feet can be provided. 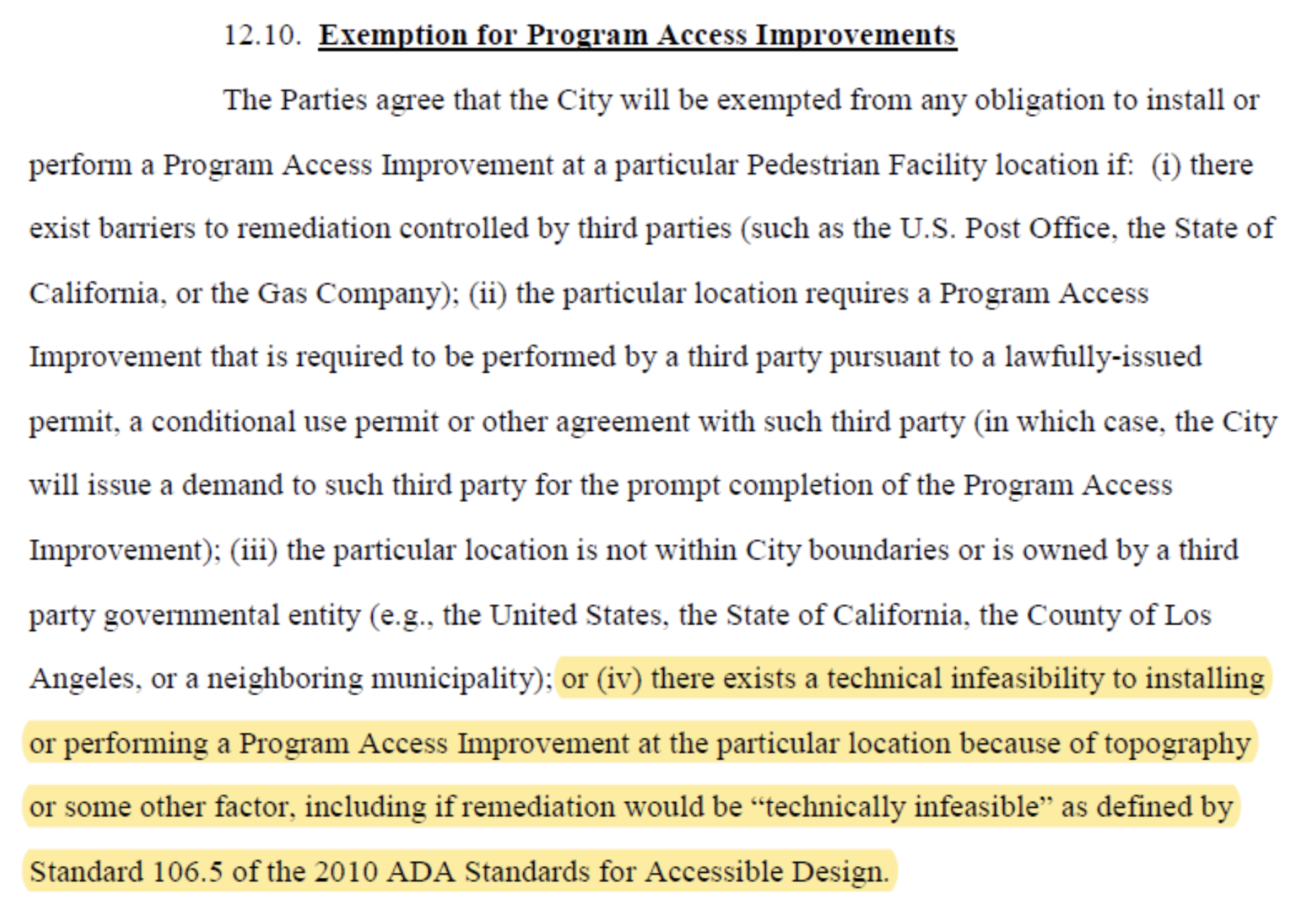 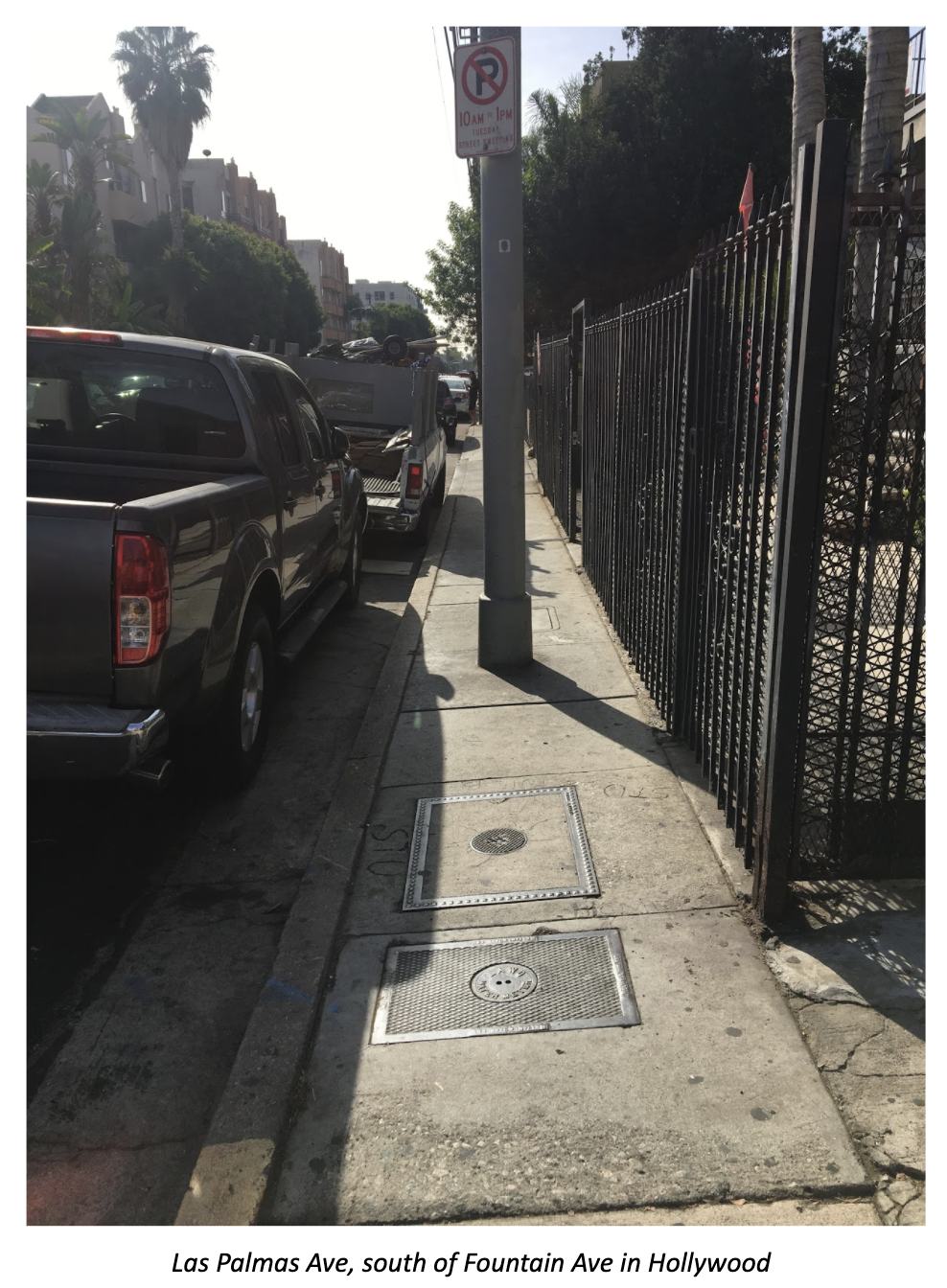 Beyond Willits, the issue of inaccessible sidewalks and “alternate” paths of travel has been seen in other areas, with the City’s preferences most certainly not on ensuring full access.

Local advocate Don Ward made a map in 2015 to show just how long and tortuous the “alternate paths” would be for someone to go from Point A to Point B (in this case a real person going from their house to their church) with Option 3, the thick green line, being the most direct yet discarded option. Rather than enabling someone going from Point A to Point B in a half mile trip, the City had no problem with making that trip a ¾ mile trip (BOE Option 1--the design the City chose) or a 1 mile trip (the now completed Red Car Bridge + Glendale). This project maintains four auto-only lanes when City staff initially recommended three to accommodate a southern sidewalk, but were overruled by Councilmember Mitch O’Farrell. 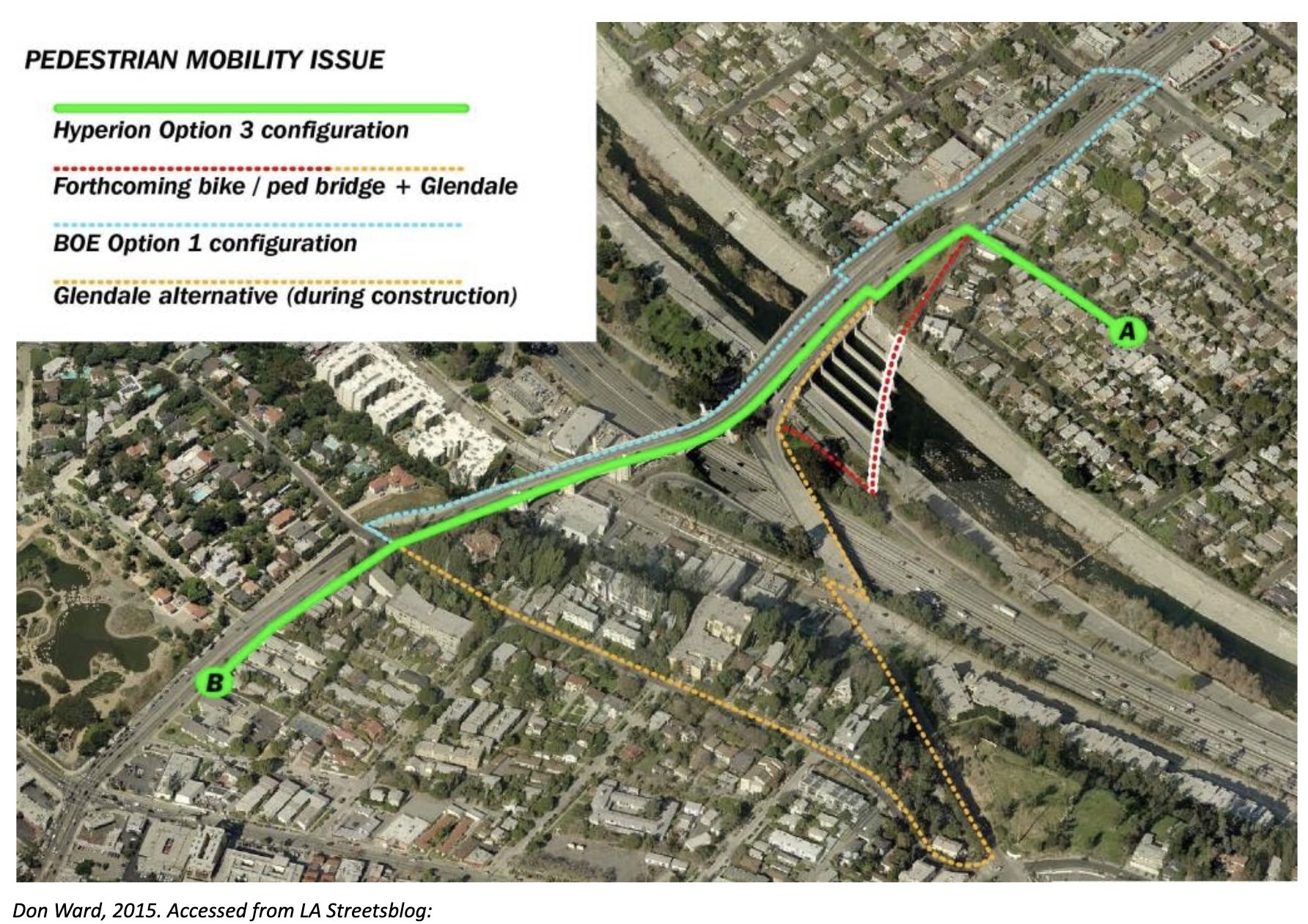 The City makes judgment calls in ignoring the accessibility concerns of marginalized Angelenos all the time. In the case of the Glendale-Hyperion Bridge, it was for unimpeded car access. The City is okay with this apathy yet seeks to enforce stricter adherence onto private actors suffering from homelessness.

Private Actors and the Public Right-of-Way

The City’s failure to build or maintain the physical infrastructure of accessibility is one thing. However, also built into this ordinance amending 41.18 is placing the onus for maintaining an accessible path of travel onto certain private actors--in this case, those suffering homelessess. This assumes a level of immediate responsiveness (backed up by armed law enforcement of course) that the City most certainly does not expect from other private actors who impede the public right-of-way.

Think of how often construction projects are granted waivers to completely close a sidewalk during construction without a temporary diversion.

In many LA neighborhoods, large hedges bulge out over the sidewalk. A bulging ficus hedge will turn a 4 ft sidewalk into a 2 ft sidewalk. Ever had to walk on one of those goat paths in the boulevard to avoid such an obstruction? How accessible is that? There is of course, no armed enforcement agency proactively trimming hedges and enforcing compliance.

Think of how often, when traveling down a sidewalk, that you encounter your pathway blocked by a parked car? Even after tightening the law against blocking parkways in 2017, cars are still parked across and astride sidewalks. Occasional rounds, and responses to resident-submitted complaints from Parking Enforcement is not enough. Can we really say the City has more, or even as much an interest in stopping cars blocking sidewalks than it does stopping those who are unhoused from existing on the sidewalks?

Think of how often construction projects are granted waivers to completely close a sidewalk during construction without a temporary diversion. If you have been to New York City, the difference with Los Angeles is extremely stark. In New York City, every project seemingly has a scaffolded temporary walkway, while here in Los Angeles, for example, 400 feet of sidewalk was completely closed outside the Target Husk at Sunset and Western for almost six years until the Target opened last month. 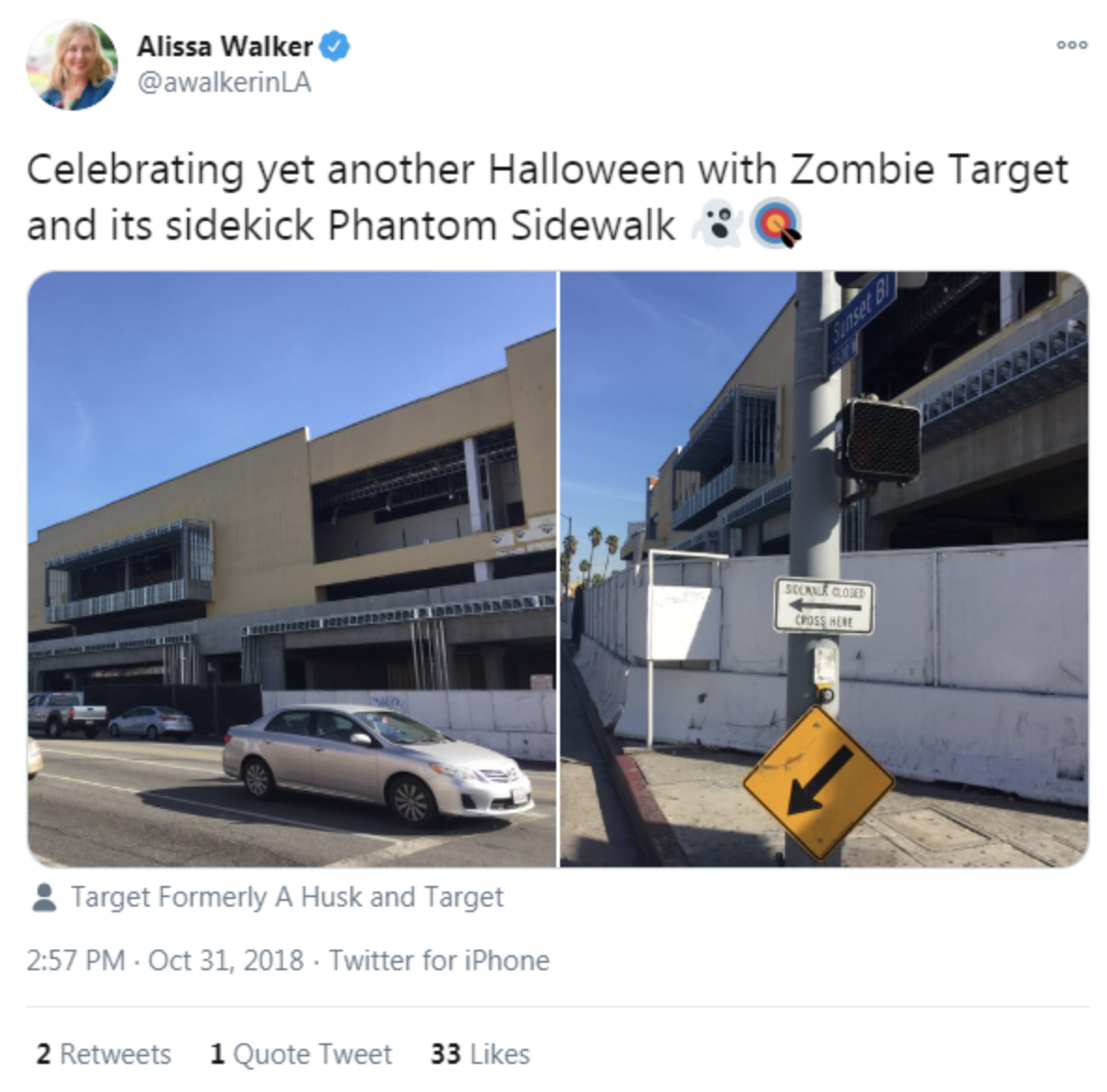 It is evidently not very urgent to the City of Los Angeles to resolve sidewalk closures and obstructions caused by private actors.

At a fundamental level, this crass use of accessibility to try and enforce a more draconian regime upon those living in our streets should make us challenge the City into actually treating walking and rolling travel and access as a priority.

As we said earlier, there are numerous fundamental problems with this proposed ordinance. Besides its awful historical antecedents, there are also the LA-specific issues of adding language to the ordinance prohibiting being homeless within 500 ft of a shelter--placed in order to appease anti-homeless voices. Another issue is that the City is not meeting its own various housing goals to house people living on the streets: having not provided an adequate amount of rooms in hotels under Project Roomkey, not getting enough A Bridge Home or other shelters or Permanent Supportive Housing projects online.

These and other problems with the construction of this ordinance are the main issues we need to fight in this measure. But in addition, we must not let walkers, rollers, and those with mobility disabilities be made the shield the City uses to defend itself from our opprobrium, as the City has historically not met these needs.

At a fundamental level, this crass use of accessibility to try and enforce a more draconian regime upon those living in our streets should make us challenge the City into actually treating walking and rolling travel and access as a priority. We should demand our City focus on what they can build, maintain, and fix first, and that when it comes to private actors, that the City should work to get compliance from those with the most power, such as construction companies, developers, and homeowners rather than criminalizing the actions of those with the least power, such as street vendors and the unhoused.

In addition we should demand actual innovation and responsiveness from our City to solve real issues exacerbated by COVID-19 and the City’s failure to house our unhoused neighbors. For example, we have underpasses where encampments are present on both sides of the street. Why doesn’t the City ask Caltrans to use jersey barriers to create temporary sidewalks on the roadway in those instances? A clear example would be Gower St. under the 101 where there are four auto-only lanes--plenty of room for such a solution. Wouldn’t that be a quick-build solution that would deal soberly with the reality that an underpass is an encampment area safe from the elements (and therefore a place where people will live until we house them) as well as the reality that people might have to travel that path with no alternate path available?

When it comes to the legal power to enforce a clear path of travel, all the City needs is a Code Section that allows for a clear path of travel if there are no alternate paths of travel within 200 feet. In other words, the same standard The City holds itself to when it comes to the $1.3 billion settlement it agreed to in Willits. No more, no less. No special clauses and additional burdens for those suffering homelessness.

Of course, any enforcement of this (or any other non-emergency related calls) should be in the purview of a CAHOOTS-like unarmed mental health and social outreach system, not LAPD. Until our City’s vision of public safety and law enforcement is drastically changed, we cannot in good conscience support any ordinance prohibiting sitting or sleeping on sidewalks. Even with the understanding that there are folks suffering from mobility disabilities that may encounter people sleeping or sitting in their path of travel, as a matter of policy we have to create new and expanded pathways for people instead of banishing the unhoused from these spaces. The sad truth is that the City has a lot to work on in their own “house” before they start demanding things of those suffering in our streets.